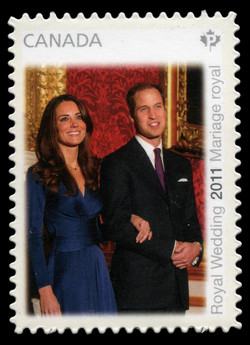 Wedding bells will soon ring out for His Royal Highness Prince William of Wales and Miss Catherine Middleton as they exchange their vows at Westminster Abbey in regal pomp and enchanting splendour. Along with the rest of the world, Canada offers its best wishes to the newlyweds on an auspicious beginning to a long, peaceful and happy life together.

To mark this momentous occasion, Canada Post will issue two commemorative stamps on the Royal Couple’s wedding day. One stamp will be released at the domestic rate (PERMANENT™), and another at the international rate. A majestic array of stamp collectibles and gift products will be available also, giving Canadians a way to commemorate the day with special keepsakes. As is fitting, the representative of Her Majesty Queen Elizabeth II in Canada, His Excellency the Right Honourable David Johnston, Governor General, will have the honour of unveiling the stamps at his residence in Ottawa just days before their release.

The PERMANENT™ stamp bears a picture taken when the couple announced their engagement in November 2010. The international stamp features the official engagement picture taken by Mario Testino, one of the world’s most well known fashion photographers. In the latter picture, against Miss Middleton’s white dress, the beautiful sapphire and diamond engagement ring first worn thirty years ago by Lady Diana Spencer, who became Princess of Wales, Prince William’s mother, is highly visible.

Isabelle Toussaint, the Montreal-based graphic artist who designed the stamp products and other collectibles, used photographs of the famous Benedictine abbey’s ecclesiastical architecture for the background in several of the stamp products. The abbey has been the coronation church since the year 1066 and the setting of several royal marriages over the last century, including that of Prince Williams’ grandmother, Queen Elizabeth II, in 1947 to then Lieutenant Philip Mountbatten, now His Royal Highness The Prince Philip, Duke of Edinburgh.

Canada Post announced the addition of these latest royal stamps to its 2011 stamp line-up in February, and expedited the typical stamp approval, selection and production processes to ensure Canadians would have a memento of the occasion on the day of the wedding.

Royal Tour
Soon after the wedding, Canada will be honoured to welcome the royal newlyweds on their first overseas tour, arriving June 30. The Royal Couple will visit Alberta, the Northwest Territories, Prince Edward Island, Quebec and the National Capital Region.

Canada Post’s royal stamps
Many Canadians take pride in royal tradition and have a deep-seated attachment to their British royal heritage, both culturally and historically. This issue continues Canada Post’s long history of commemorating British royal events and milestones with stamps, including weddings, tours, coronations and birthdays.