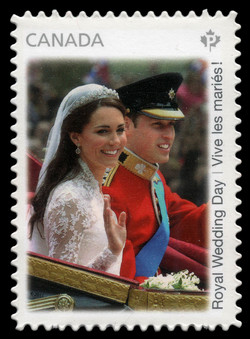 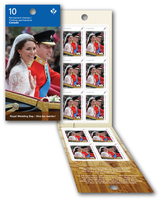 The world looked on this spring as a dashing Prince in uniform married his beautiful truelove in a romantic, fairy tale wedding. The Royal Couple left Westminster Abbey in London, England, amidst great pomp and pageantry, as Their Royal Highnesses The Duke and Duchess of Cambridge. Throngs of well-wishers cheered as they proceeded to Buckingham Palace, where they waved to the crowd and kissed on the balcony.

As the Royal Couple sets off on its first official, cross-country tour of our country, Canada Post is issuing its third and final stamp in its Royal Wedding series. A candid photograph of the newlyweds in the 1902 State Landau during the procession graces this domestic rate PERMANENT™ Royal Wedding Day stamp. Like the first two in this set, the souvenir sheet and Official First Day cover also show photographs of the famous Benedictine abbey’s ecclesiastical architecture.

Wedding Attire
The Duchess’s dress was a closely kept secret right up until she stepped out of the Rolls-Royce at the Abbey on April 29. The classic, long-sleeved lace and satin gown, as well as the veil, was created by well-known British fashion designer Sarah Burton. The dress was elegantly tailored with hand-cut English lace and French Chantilly lace. Prince William wore the full dress uniform of his honorary rank of Colonel of the Irish Guards, which was made and fitted by Kashket and Partners, with a forage cap. He also wore the blue riband, as a Knight of the Garter, affixed with his RAF wings and Golden Jubilee Medal.

State Landau
The Landau is an open-topped, horse-drawn carriage, the most elegant of the several landau used by the Royal Family. It was built for Edward VII, and is used for conveying The Queen and visiting Heads of State to Buckingham Palace or Windsor House. The Landau has also been used often for Royal Weddings.

Royal Tour Canada 2011
Following a 10-day honeymoon in the Seychelles, Their Royal Highnesses The Duke and Duchess of Cambridge will tour Canada. The Couple will be in Canada for eight days, from June 30 until July 8. They will take part in the Canada Day Noon Show on Parliament Hill in Ottawa, and will also visit Alberta, the Northwest Territories, Prince Edward Island, and Quebec.

This will be The Duke’s third tour to Canada. Previous visits were with his family in 1991 and 1998. It will be The Duchess’s first visit to Canada, and the first tour for Their Royal Highnesses as a Royal Couple.

Royal Visits
The first visit to Canada by a member of the Royal family took place in 1786, when Prince William (later King Edward IV) celebrated his 16th birthday as a young naval officer on a ship off Newfoundland and Labrador. In 1860, Prince Albert of Wales visited Ottawa, the new capital of the Province of Canada, to lay the cornerstone for the Parliament Buildings. An era of regular visits began with Queen Elizabeth II, who first toured the country as a Princess prior to her coronation in 1951. Since then, The Queen and members of the Royal Family have taken many opportunities to visit and tour Canada. Traditionally, they attend official engagements, meet with politicians, greet the public, and review troops. In the last few decades, Royals also occasionally vacation in Canada to enjoy our uniquely beautiful vistas and warm hospitality.