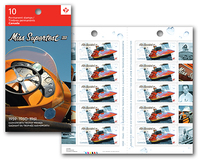 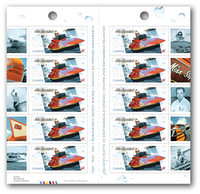 Fifty years ago, on August 7, 1961, tens of thousands of excited spectators stood on the banks of Lake Ontario at Long Reach, near Picton, Ontario, and held their collective breath as Canadian hydroplane Miss Supertest III made history by capturing the International Harmsworth Trophy for a third time in a row. Her story is almost mythic in that it combines both triumph and tragedy, and is still told again and again by those who were there to witness her historic win.

At the age of seven, Thompson told his father that he wanted to win the Harmsworth for Canada someday. He inspired pride throughout the nation and caught the attention of the world when he made good on his childhood ambitions, capturing the prestigious international Harmsworth Trophy in 1959, 1960 and 1961. Miss Supertest III became a powerful example of Canadian ingenuity that still lives on in the hearts of hydroplane enthusiasts.

Supertest Petroleum, founded by his father, J. Gordon Thompson, lent its name to three of the Thompson hydroplanes. Despite his Vice-presidential responsibilities at the then family-owned business, the younger Thompson dedicated much of his energies to speedboat racing. He achieved lesser triumphs with Miss Supertest I (formerly Miss Canada IV) and Miss Supertest II, which broke the world’s straightaway record with a speed of 297 km/h (184.495 mph).

Her first and only non-Harmsworth race, with Hayward driving, was the 1959 Detroit Memorial Cup. Later that year, in August, Hayward piloted Miss Supertest III to a successful Harmsworth Trophy challenge on the Detroit River, with an average speed exceeding 185 km/h (115 mph). She and her racing team successfully defended the Harmsworth Trophy the following two years at Picton. In the 1960 competition, Hayward set a world lap speed record of 203 km/h (126.226 mph) on the 8 km (5 mile) course.

Hayward drove Miss Supertest III in only four races, but was undefeated in all. In a tragic accident on September 10, 1961, during the U.S. Silver Cup race on the Detroit River, and only weeks after winning his third Harmsworth race, Hayward was moving at an estimated 249 km/h (155 mph) in the older Miss Supertest II when she flipped, killing him. The Thompson team retired from racing, and Miss Supertest III was permanently dry-docked. In tribute, a bay in Lake Ontario near Picton was named Hayward Long Reach. Both Hayward and Thompson have been inducted into the Canadian Sports Hall of Fame and the Canadian Motorsport Hall of Fame.

For designer and speed enthusiast Ivan Novotny, Vice-president at Taylor|Sprules Corporation, designing the two Miss Supertest III stamps was a dream job. He had the great fortune of being able to spend time with Thompson, now in his mid 80s. In addition to allowing Novotny and the partners of the firm the opportunity to comb through his personal archives for imagery, he generously shared his own insider information about the design of the speedboat and his experiences as a part of the race team. For Novotny, it was an experience that crystallized the creative direction for the stamp.

“I was thrilled that he was willing to show us Miss Supertest III. The boat feels very raw, powerful. It’s very impressive. But for me, the most inspiring aspect of seeing the speedboat is watching Jim (Thompson). There’s something in the way he touches the boat, the way he smiles. He was talking to us, but I was watching his hand stroke the aged cracked varnish—it was as if the memories were flooding up through his fingertips.”

Novotny adds that viewing this relationship between man and machine helped to clarify his creative approach.

“There’s something incredibly graceful about Jim—the genuine affection for the era in which Miss Supertest III won and the people who made that possible. I marvelled how he was able to jump back in time and remember so many precise details. It was definitely an exciting chapter in his life—but just one chapter of many. His respect for this machine is almost tangible. I wanted to capture that, to represent the era with a particular palette; to create a design that would pay homage to the speed and power and incredible grace that was Miss Supertest III and her team.”