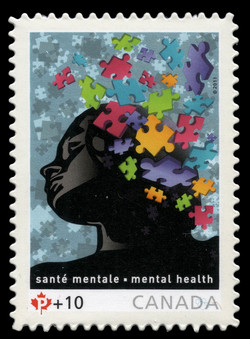 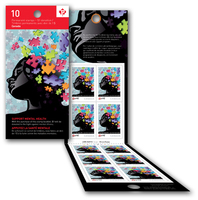 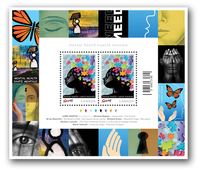 When Canada Post invited Canadians to submit designs for its 2011 Mental Health domestic rate semi-postal stamp via www.deliverhope.ca, Miriane Majeau of Terrebonne, Quebec, got involved because she wanted to create awareness of mental illness and the way it has touched the lives of those closest to her. Her entry, “The Puzzle,” resonated not only with the judges—mental health professionals and stamp design experts—who selected it as a finalist, it also touched a chord with the Canadian public, who gave it the winning share of the more than 286,000 online votes.

In speaking proudly of her winning design, Miriane Majeau says, “Dealing with mental health issues can be like putting a puzzle together. As the puzzle comes together, as you find the right pieces and connect them in the right way, something beautiful and whole is revealed.”

Canada Post received more than 300 stamp design entries, which were whittled down to five finalists and presented to the public for their vote. The designs created by the other four finalists in the competition, all from Ontario, will be featured on the Official First Day Cover envelope and souvenir sheet.

The 2011 Mental Health stamp is the fourth annual semi-postal issued in support of the Canada Post Foundation for Mental Health. Collectively, stamps issued in the past three years have raised close to a million dollars, via a dollar from the sale of every booklet of ten stamps going to the Foundation.

Along with a framed commemorative enlargement of the final stamp, Majeau got to select a mental health charity to receive a $500 donation from Canada Post. She chose La Fondation les petits trésors de l’Hôpital Rivière-des-Prairies to receive the award.

Majeau notes that, “Throughout the competition, strangers, people I didn’t know, would tell me their stories about mental illness and how they related to the puzzle. The rallying effect this has created makes me very happy, I had reached my goal, my drawing was telling their stories—and encouraging others to tell theirs.”

Deliverhope.ca delivered winning stamp design
This stamp marks the first time in history that Canada Post has not only invited Canadians to submit designs for a stamp, it also tasked the public, by way of social media, to participate in the design selection process.

Last November, we invited Canadians to submit designs for the 2011 Mental Health Stamp via the www.deliverhope.ca website. Those who submitted designs were allowed to promote their entries using social media, and the design that proved most popular became one of 20 semi-finalists, chosen by an advisory panel including mental health experts, representatives from the Canada Post Foundation for Mental Health and Canada Post’s stamp and design experts.

These 20 entries were brought before Canada Post’s Stamp Advisory Committee, and five designs were selected as semi-finalists. In February 2011, those five were revealed to members of the public, who voted on their favourites. The design that received the most votes became our 2011 Mental Health PERMANENT™ domestic rate semi-postal stamp, issued with a 10-cent surcharge to generate funds for the Foundation.