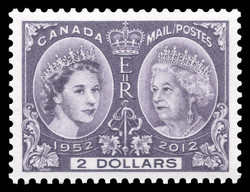 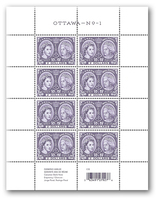 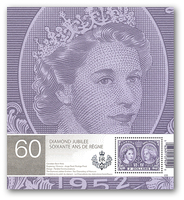 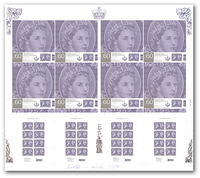 NOTE: In the previous issue of Details (Vol XXI, No. 1), we published the first instalment of this article, focusing primarily on the Queen Elizabeth II Diamond Jubilee stamps and collectibles that were issued in the first three months of 2012. In this final instalment, we'll take an in-depth look at the stamps and collectibles that will be issued from April to June in honour of The Queen's 60-year milestone.

In 1897, The Post Office Department of the Government of Canada celebrated the Diamond Jubilee of Queen Victoria—the only other Monarch of Canada to achieve the 60-year milestone—with an issue of 16 intaglio stamps. The design featured a portrait of the young Queen, as well as one created at the time of Queen Victoria's 60th anniversary. The series remains a classic for collectors.

As we continue our tribute to Queen Elizabeth II's Diamond Jubilee, in May, Canada Post will release a single stamp that mirrors the design of the 1897 stamp. Engraved and printed in the same purple tone as the $2 Queen Victoria commemorative, the 2012 recreation features an image of a young Queen Elizabeth II, taken early in her reign, facing a more recent photograph of Her Majesty.

The stamps are issued in a pane of eight. A souvenir sheet is available individually and included  in Volume 5 of our Diamond Jubilee Keepsake Folders.

According to David Craib, Owner and Creative Director of Parable Communications in Ottawa, “The design of both the souvenir sheet and the Official First Day cover was inspired by the stamp. Both feature a magnified image of the (young) Queen that highlights the craftsmanship that went into creating the intricate design of the stamp. Dramatically enlarging miniaturized elements allowed us to achieve a surprisingly dynamic and contrasting effect. Our goal was to create collectibles that would compliment and enhance this unique stamp.”

Craib concludes that, “We wanted to make use of the engraving technique wherever possible. Both the original Queen Victoria stamp and the new Queen Elizabeth II stamp are tactile, and the souvenir sheet reflects this aspect.”

Despite the fact that the original Queen Victoria stamps were issued 115 years ago, they were very much in the minds of collectors, particularly as Queen Elizabeth II's Diamond Jubilee loomed on the horizon.

Says Jim Phillips, Director of Stamp Services, “For years, philatelists and collectors who specialize in stamps featuring Queen Elizabeth II have told us the Queen Victoria Diamond Jubilee issue was the standard by which stamps celebrating this Diamond Jubilee would be measured. We listened to them and decided that since this is such a rare milestone for a reigning Monarch, since there have been only two—we would borrow inspiration from that great 1897 issue. And the result is, we think—definitely fit for a Queen. Our Queen Elizabeth II.”

More Keepsake Folders round out celebration

In addition to the May issue of the engraved Diamond Jubilee stamp, Canada Post will also release the final three volumes of the Diamond Jubilee Keepsake Folders, one each in April (Vol. 4, 1983-1992), May (Vol. 5, 1993-2002) and June (Vol. 6, 2003-2012). In keeping with the first three volumes, each Keepsake Folder houses a mini-pane of four stamps, an informative booklet pertaining to the period, plus a postage-paid postcard featuring all the stamps bearing Queen Elizabeth II's image issued during each 10-year time frame.

The mini panes were designed by Gottschalk+Ash International. According to designer Doreen Colonello, the designs were meant to be like a snapshot out of a history text book, a collage of images, dates and colors which flowed together. She notes that the painterly spot illustrations, which formed the collage of the timelines, were essential to creating this feeling. “Our goal was to complement the featured stamp and create a timeline of historical events through photos, dates and colours. The design process included research not only for the photography of the historical events, but also to choose the appropriate typography for each ten-year period.”

Queen Elizabeth II ascended to the throne on February 6, 1952, following the death of her father, King George VI. Her Coronation took place on June 2, 1953, in Westminster Abbey. Canadians got to share the celebration on the same day, with a film of the event flown from Britain to Canada.

Through the 60 years of her reign, Queen Elizabeth II has made 22 visits to Canada. In 1957, she gave her first ever live address on television and opened the first session of the 23rd Parliament. Her most recent visit was in 2010, when she and The Duke of Edinburgh visited five Canadian cities in nine days. To a sodden crowd braving a rainstorm near the Halifax Citadel, she said, “My pride in this country remains undimmed. Thanks very much for your welcome. It is good to be home.”