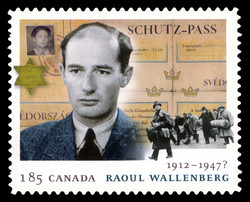 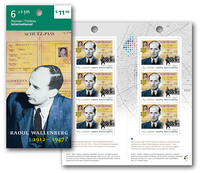 What happened to Raoul Wallenberg after 1945 is a bit of a mystery. What is known – and is legend – is his mission to save as many as 100,000 Jewish people in Budapest, Hungary during the Second World War.

Wallenberg – then 32 – arrived in Budapest in 1944. He designed a protective passport called the Schutz-Pass featuring the symbols and colours of Sweden, which he handed out indiscriminately, often in dangerous circumstances, to people in the Jewish community. But before he could return home at the end of the war, he disappeared into Soviet custody with no satisfactory explanation of his fate.

In recognition of his efforts, the Canadian government made the Swedish-born Wallenberg Canada’s first honorary citizen in 1985, and designated January 17, the day of his disappearance, as Raoul Wallenberg Day. Jim Phillips, Director of Canada Post’s Stamp Services notes, “As an international citizen, Wallenberg is recognized the world over as a hero. We’re highlighting his place as Canada’s first honorary citizen as well as his heroic achievements that earned him that distinction.”

The stamp, featuring Wallenberg’s passport photo from 1944, shows a number of elements related to his efforts in Budapest including Hungarian Jews rescued from deportation and images from the Schutz-Pass.

Glenda Rissman of q30design said her design team wanted to focus on educating people about Wallenberg. “The stamp is really about representing the facts of his life and his deeds.” In particular, she points to stories of Wallenberg rescuing people right off the deportation trains. “Even at the last moment, he was able to change people’s destiny.”