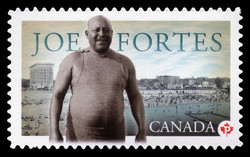 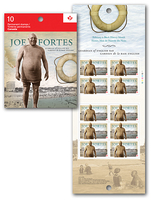 Seraphim “Joe” Fortes arrived in Vancouver from his native Trinidad and Tobago in 1885. Enamoured with the many beautiful swimming locations, he decided to stay, eventually moving into a tent on his favourite beach at English Bay. While there, he taught both adults and children to swim and appointed himself voluntary patrolman, chaperoning couples and chasing away hooligans.

In 1894, the city formalized Fortes’ volunteer work, making him an official lifeguard. Fortes excelled at the job, reputedly saving many lives. In 1901, he was made an official swimming instructor, receiving pay for the summer months. Fortes became such a beloved citizen that, in 1910, a private committee awarded him a gold watch and a locket – both of which he is wearing in the photograph on the back of the stamp booklet – as well as a cheque for $472.

When Fortes passed away in 1922, Vancouverites were stricken with grief. The city paid for a public funeral, which thousands attended. In 1927, citizens raised money to install a fountain at English Bay in Fortes’ honour. The inscription reads “Little children love him.”

“My overall intention, explains Minja, was to bring life to the character of Joe Fortes, showing him as a strong and personable man, who was caring, responsible, fun-loving, and honourable.”

Fortes is shown on the stamp in his swimming apparel as many would remember him, against a background of the beach he loved so dearly. Minja notes that “it was important to show him in context, standing in the forefront of the stamp with English Bay, circa 1919, well-protected, so to speak, behind him.”