Signs of the Zodiac: Sagittarius 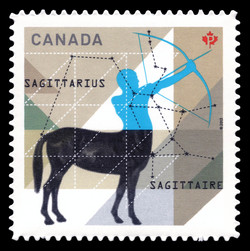 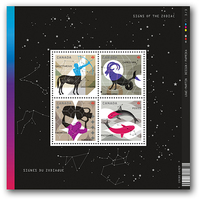 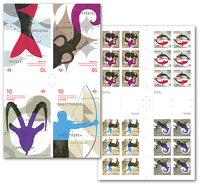 This spring, Canada Post will issue the final four stamps in the 12-part Signs of the Zodiac series, which began with Aries in spring 2011.

As with the stamps issued in 2011 and 2012, thisissue was also designed by Paprika Design ofMontral. According to Creative Director LouisGagnon, We are proud of having designed this series and put a great deal of effort into all theaspects of the stamp issue the OFDCs, the souvenir sheets, the booklet covers. Our goal was toemphasize the visual elements of each stamp andcreate a sense of surprise within the continuity ofthe series. We are confident that our work here hasa timelessness and will continue to appear fresh and innovative over the years.

The stamps, each printed in the vivid colours traditionally associated with their respective sky sign, feature a layering of astrological symbolism and a highly stylized representation of each constellation. This colour scheme and adherence to the symbolic language used for ages to map the night sky is also prevalent in the Official First Day Covers. Now with all12 covers released, collectors of the entire series will be able to form a complete horoscope wheel by placing the covers side by side in a circle.

According to Stamp Design Manager Alain Leduc, astrology borrows from myths to explain personality quirks. It made the night sky much less foreboding to our ancient relatives and provided an early means of noting the passing of time and the seasons. It was a way of bringing order to the chaos of the natural and astronomical world.

This is what we have tried to do with these stamps to incorporate the traditional imagery and colours, to layer in the star charts and natural phenomena of the sky, to bring both the real and thefantastic together in the design which echoeshow astrology merges myth with actual constellations.

Leduc continues, Paprika created a grand scheme to this entire issue every piece was planned to work with the others, to create an integrated issuethat when brought together, would form a larger, more interesting view. Its a view of the big picture, which you need when youre looking at theuniverse.

Born under the sign of the archer? Its your lifes workto seek the truth. Your sign is represented as a centaur the intellectuals of ancient Roman mythology.

Capricorn
The practical and persistent goat, Capricorn is the most stable and serious sign of the zodiac. But approach with caution Capricorns mood swings arelegend which explains why Capricorn is the root of capricious.

Aquarius
Intelligent and logical, those born under the sign of the water bearer are profoundly independent and their desire to help humanity makes them strong supporters and loyal friends.

Pisces
Theres a reason why those who are nave and easily fooled are sometimes called fish. Those born under Pisces are compassionate, kind and easy-going butfar too sympathetic for their own good. While they lean toward non-conventional lifestyles, their rebellions are personal; they lack the motivation to battle the establishment.