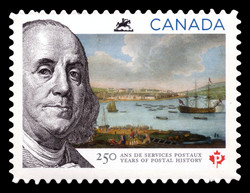 The hidden date for this stamp can be found near the portrait of Benjamin Franklin. 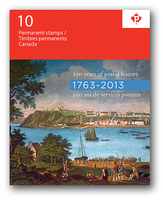 In 1753, Philadelphia Postmaster Benjamin Franklin was promoted to joint deputy postmaster general for the British colonies and opened the first Canadian post office in Halifax to link the Atlantic colonies with Britain. But eventually, Franklin’s involvement with the growing revolt against the British Empire made it necessary for him to leave his post.

Hugh Finlay was confirmed as postmaster general at Québec on June 10, 1763. The ambitious Finlay arranged for a courier from Montréal to New York to reach the monthly packet sailing to Britain. By 1771, weekly service was available year round. His innovations earned a profit for the British Post Office Department, which paid Finlay a fifth of gross receipts.

In 1833, the Quebec-built Royal William was the first steamer to carry mail across the Atlantic. Canada’s first railway line was established in 1836, and became quickly recognized as a way to carry mail faster and farther. In 1840, Samuel Cunard’s new steamer Britannia transported mail between Liverpool and Halifax. Following Confederation on July 1, 1867, postal systems from Halifax to Fort William, on Lake Superior, amalgamated. And on April 1, 1868, An Act for the Regulation of the Postal Service officially created Canada’s uniform postal system.

Stamp designer Andrew Perro notes the challenge of depicting such a long, detailed history. “Realizing 250 years of Canadian postal history on a stamp is like trying to summarize it in one sentence – not easily done. Instead, the design focuses on the system’s early establishment and how it helped to shape Canada’s future.”