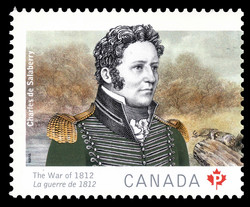 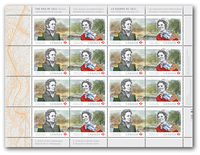 For the British and Canadians, and their First Nation allies, the second year of the War of 1812 brought a few defeats and some notable victories. Americans invaded the Niagara Peninsula and marched on Montréal. The battle successes of Brock, Tecumseh and others in 1812 were in jeopardy. Some communities in southern Ontario that saw fighting the previous year were now witnessing an American occupation of Canadian territory. The challenges of 1813 spawned heroes and heroines who, through cunning and personal acts of bravery, changed the course of the war.

In May 1813, American soldiers captured Fort George, taking control of both sides of the Niagara River. In occupied Queenston, American officers billeted themselves in the household of a local woman, Laura Secord. On the evening of June 21, Secord learned of a secret plan of attack that convinced her to travel more than 30 kilometres to warn British, Canadian and First Nation forces.

Her renowned journey took her through fields, ditches and underbrush to avoid the roads where American sentries stood watch. After 17 hours of difficult travel, she finally reached an encampment of First Nation warriors who brought her to British Lieutenant FitzGibbon.

The information Secord disclosed proved vital, contributing to the ambush and defeat of the American forces at the Battle of Beaver Dams. The house she left in the early morning of June 22 is pictured on the Official First Day Cover.

Between the river and thicket-covered swamp, de Salaberry’s soldiers constructed defences of fallen trees called abatises. As the battle unfolded, de Salaberry took advantage of momentary confusion in American ranks. He signaled his men to erupt in calls, which gave the Americans the impression that a far larger force was joining the battle and caused them to withdraw.

Stamp designer Susan Scott led the charge on this year’s issue with Secord and de Salaberry. Scott strove to highlight the connections in these heroic stories through the background of the stamps. The landscape, which merges directly at the perforation when the stamps are side by side, shows a summer forest for Secord’s June adventure toward Beaver Dams and an early fall for de Salaberry’s October victory. Scott mirrored fallen trees representing de Salaberry’s abatises on the left of the perforation with a beaver dam on the right, recalling Secord’s destination.

Challenged with maintaining historical accuracy and capturing these courageous acts, Scott turned to costume experts, while injecting some drama into the stamps.

“We wanted to show de Salaberry in his Voltigeurs uniform, young, as he would have been during the battle, and without his medals – he hadn’t earned them just yet.”

For Secord, Scott explains, “Everybody knows Secord and her white cap but it’s very hard to make someone look heroic with that cap.” The result? Secord’s hair peeks out, ruffled, from under the headpiece, recalling her arduous trek.