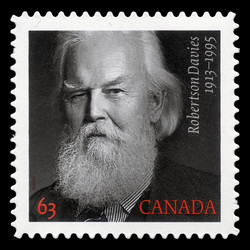 Robertson Davies was born on August 28, 1913, in Thamesville, Ontario. When his father purchased the Kingston Whig-Standard in 1925, the family moved to Kingston. Robertson attended Toronto’s Upper Canada College, then Queen’s University before receiving his Bachelor of Literature from the University of Oxford’s Balliol College in 1938. While in the U.K., he met and married stage manager Brenda Mathews.

Davies returned to Canada in 1940, as literary editor of Saturday Night, and in 1942, became editor, then publisher, of the Peterborough Examiner. He published 18 books, produced several of his own plays and served on the board of the Stratford Festival.

In 1960, Davies began teaching at Trinity College and in 1961, became the founding master of Massey College, which opened in 1963.

Davies published his best known novel, Fifth Business, in 1970, appearing on the Toronto Star bestseller list for 42 weeks. It was followed by The Manticore (1972), and World of Wonders (1975), which became known as The Deptford Trilogy.

Daughter Jennifer Surridge was delighted when the stamp was proposed. “The linkage with the Massey College anniversary rounds out the occasion nicely.”

Says designer Steven Slipp about the stamp, “The typography is based on Carl Dair’s Cartier, acknowledged as Canada’s first typeface. Dair’s important type archive and a press donated by Davies’ father are housed in the Robertson Davies Library at Massey College.”

“As a cultural luminary who helped to form the Canadian identity, a portrait of him by Yousuf Karsh was essential. The stamp frames an all-knowing academic figure, with his trademark beard worthy of a mythic god.”