The Hastings and Prince Edward Regiment 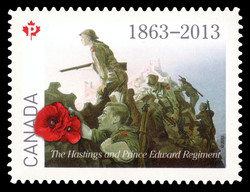 The Regiment has served with distinction and earned many battle honours throughout its history, beginning with North-West Canada 1885 for its service during the North-West Rebellion. It also provided volunteers to fight in the South African (Boer) War.

In 1939, the Regiment mobilized for the Second World War on December 22. Following landings in Sicily on July 10, 1943, and on the Italian peninsula on September 3, 1943, the Regiment fought in southern Europe until 1945. In March of that year, it moved to northwestern Europe where it fought near Nieuw Milligen, Holland, on April 17, 1945.

By the end of the war, the Regiment held the distinction of winning more battle honours (31) than any other regiment in the Canadian Army. Ten of the many honours it earned during the Second World War appear on its regimental colours. Since that time, volunteers from the Regiment have remained active by serving in Sierra Leone, Egypt, Croatia, Bosnia-Herzegovina, Kosovo, Somalia, Haiti and Afghanistan.

Nicknamed the “Hasty Ps,” members of The Hastings and Prince Edward Regiment also earned the moniker of “Plough Jockeys” during the Second World War, as many had enlisted straight from their homes in rural Ontario. Far from finding the term insulting, the Regiment embraced its new name; to this day, the Regimental Association’s tabloid is titled The Plough Jockey.

Dave Sacha of Sputnik Design worked on previous regimental stamps. This year, to refresh the design, the stamp features the work of Canadian war artist Ted Zuber, contrasted with the bright red of poppies to convey the Regiment’s history of courage and sacrifice.

“To keep the feel of this new stamp similar to military stamps we have issued in past years, we used the same type of historical imagery on the booklet and Official First Day Cover, along with the same colour palette,” explains Sacha. “We chose images mainly of groups – featuring both men and women – to represent the changes and continuity from past to present.”

“On the back of the OFDC, the lone soldier saluting his fallen comrades brings us back to remembrance and of course, poppies that appear on the stamp,” he adds.

“Canadians appreciate the important history of regiments like The Hastings and Prince Edward Regiment,” says Stamp Design Manager Liz Wong. “This stamp not only illustrates the traditions and legacy of the Regiment but also calls on us to remember the bravery of those who served.”

Assault on Assoro by Ted Zuber