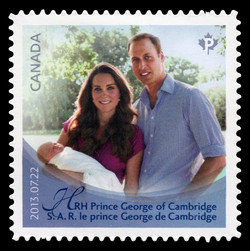 Canadians were prepared for the birth of His Royal Highness Prince George Alexander Louis of Cambridge long before his first public appearance on the steps of St. Mary’s Hospital in London. The official announcement of the Duchess of Cambridge’s pregnancy had set the world abuzz. Then on July 22, 2013, at roughly 4 p.m. London time, the information everyone was clamoring to know was the same as if it would have been for any birth: Healthy? Boy or girl? And what’s the weight? In Britain, ringing bells at Westminster Abbey, band music and military salutes celebrated the arrival of the new heir, third in line to the throne. Canada joined in, marking the birth of the wee Prince with baby blue lights illuminating the Peace Tower in Ottawa, Horseshoe Falls in Niagara Falls and the CN Tower in Toronto.

The little Prince of Cambridge actually had his royal title before the Duke and Duchess announced that their baby boy would be christened George Alexander Louis. The name, greatly influenced by the child’s royal lineage, was chosen far more quickly than it was for other members of the Royal Family: it took more than a week for the world to find out that his father would be called Prince William, and his grandfather, Prince Charles, was not officially named for close to a month.

Canada Post made the decision long before the birth of the child to mark the special occasion with a commemorative stamp, and waited patiently for the official images of the baby to become available. The photograph used in the making of the stamp was taken by Prince George’s proud grandfather, Michael Middleton, and shared with the world on the baby’s one-month birthday.

In addition to these early views of the young family, the stamp booklets feature a silky, pale blue “baby blanket” texture. The souvenir sheet shows an image of the Peace Tower awash in blue light, as it was the night of the child’s birth.

According to designer Isabelle Toussaint, “Having worked on the royal wedding stamps in 2011, I felt fortunate to be asked to design the stamp on Prince George. We started working well before the birth of the baby. I designed the stamp booklet, souvenir sheet and OFDC by creating a temporary photo montage of the royal couple with a newborn. We also planned to use a set of different colors, depending on the gender of the baby.”

“The concept was already approved and almost finalized by the time we got the official photo. Taken in a natural setting, it needed only a few touch-ups to correct the backlighting. Otherwise, it was a perfect match for the montage,” she says. “We inserted the new photo and sent everything to Buckingham Palace for final approval. The files were sent for printing a few days later.”

Canada Post hopes that Canadians will use the stamp to celebrate and share in the Royal Family’s joyous moment. For collectors, it will mark yet another milestone in history – the first philatelic image of the future King.