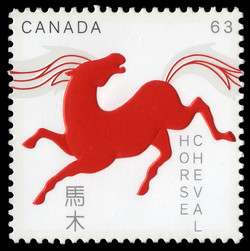 The hidden date for this stamp can be found on the horse's hoof. 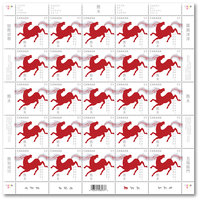 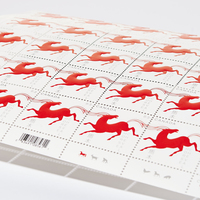 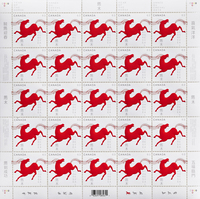 The Year of the Horse gallops into view on January 31, 2014, and rides on until February 18, 2015. Those born under the sign have more than their fair share of ingenuity, a gift for communication and a taste for the spotlight – traits that also set the benchmark for this year’s stamp design.

Throughout the design process, Paprika’s Louis Gagnon and Daniel Robitaille were keenly aware of the need to balance innovation and tradition. They focused on attributes that would not only result in a timeless design for this issue but also continue the high level of artistry and refinement that has been the hallmark of the Lunar New Year series.

“The horse is shown in movement, its mane and tail touching from one stamp to the next,” says Gagnon. “The embossing also creates a multi-dimensional look and feel, adding to the physicality of the horse, while the red and gold – traditional Chinese colours – evoke the liveliness of fire.”

The creative team grounded the image of the wild horse with a silhouette design influenced by shadow puppets and traditional print-making. Acting as a base for the flashes of red and gold, a white background serves as a soothing and elegant canvas.

Gagnon continues, “We wanted to show the energy, strength and gracefulness of the animal itself – and we put a lot of effort into featuring those characteristics in the different denominations. We wanted each stamp to be powerful.”

“We’ve used foil in the past to accentuate parts of an image, but in this case, the entire horse on the international stamp was created from embossed foil,” explains Alain Leduc, Stamp Design Manager at Canada Post. “It is definitely something special.”

In keeping with its equine theme, the Official First Day Cover is cancelled at Horseshoe Bay, British Columbia.