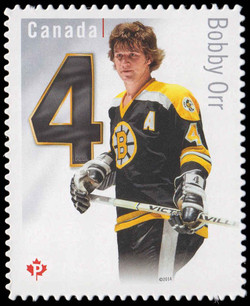 Bobby Orr
In 1966, Bobby Orr – a budding star from Parry Sound, Ontario – took to the ice with the Boston Bruins. His first year earned him the Calder Trophy and a spot on the NHL’s Second All-Star Team.

The 1969-70 season was a milestone for Orr. He was the first defenceman in League history to lead the NHL in scoring, with 33 goals and 87 assists. He won the Art Ross Trophy and the Hart Trophy. Orr also earned his third Norris Trophy in as many seasons, bringing him one step closer to his record of eight consecutive wins. For the third straight season, he was also selected for the First All-Star Team. To top it all off, the Boston Bruins won their first Stanley Cup in 29 years – with Orr scoring the winning goal in overtime. As the puck entered the net, photographers snapped an enduring photo of him soaring horizontally several feet above the ice, his arms outstretched in victory. For his outstanding play, Orr was awarded the Conn Smythe Trophy as the League’s most valuable player in the playoffs. Following this incredible year, Orr signed the first $1-million deal realized in hockey to start the 1971-72 season.