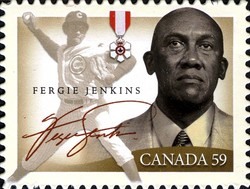 Ferguson “Fergie” Arthur Jenkins was born on December 13, 1942, in Chatham, Ontario. He excelled at sports in school and played bantam baseball as a teenager. His pitching abilities were encouraged by Gene Dziadura, a shortstop in the Philadelphia Phillies minor league system who scouted for the team. Recognizing Fergie’s natural abilities, the Phillies signed him in 1962.

Fergie Jenkins is the only Canadian honoured in the National Baseball Hall of Fame in Cooperstown, NY (inducted July 21, 1991). He was inducted to the Canadian Baseball Hall of Fame in 1987. He holds the 12th highest strikeout total in history (3,192). Fergie earned 49 career shutouts, won the Cy Young award in 1971, and in 2000, he established his charitable foundation, The Fergie Jenkins Foundation. In 2004, he received an honourary doctorate from McMaster University in Hamilton, Ontario, and in 2007, Fergie was invested into the Order of Canada.

Designer Lara Minja, of Lime Design, in Victoria, BC, notes “The determination, strength, integrity and pride of Fergie Jenkins are the attributes I aspired to bring to this stamp. The design balances a more recent depiction with an image from the past. A photograph of a more mature Jenkins is overlapped by an image of him on the pitcher’s mound. This stamp incorporates an Order of Canada icon, as well as the name and signature of Jenkins to personalize the design.”

According to Stamp Design Manager, Liz Wong, “In previous Black History issues, due to the eras in which our subjects lived, usable photographs were simply not available. We were limited to an illustrative approach. Jenkins was of a younger generation, so we could choose from a far richer range of imagery.”