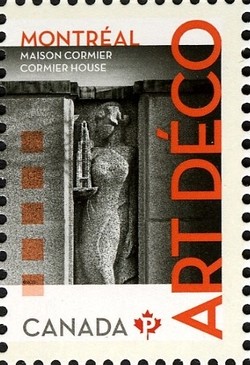 Emerging in France between the two world wars, Art Deco was a creative response to the dull austerity of the First World War that permeated the design of furniture, household goods and textiles. Still, the movement made its most lasting contribution to early 20th century architecture. Beginning between 1908 and 1912, Art Deco gained mainstream exposure at the exposition from which it took its name: the Exposition des Arts Decoratifs et Industriels Moderne in Paris, France in 1925, and the period continued well into the Great Depression. In fact, several prominent Canadian Art Deco buildings were constructed as a result of federal employment initiatives.

According to designer Ivan Novotny of Taylor | Sprules, “Many of the great (Art) Deco buildings across this country have very distinct silhouettes that were defined by the principles of the movement. It’s the commonly overlooked extraordinary details that adorn these great spires that demand a closer look.”

According to Alain Leduc, Stamp Design Manager, “With stamps, it’s the details that count, that elevate the design to something more than merely representative. For that reason, the emphasis on detail on the Art Deco period was so very inspiring. It’s the details that allow an architect to take a functional structure and make art of it.”

In this five-stamp issue celebrating the details of the Art Deco period, these five Canadian structures are showcased:

The Burrard Bridge is a six-lane, Art Deco style, steel truss bridge, built between 1930 and 1932, in Vancouver, British Columbia. Designed by architect George Lister Thornton Sharp, the bridge’s central truss is hidden by vertical extensions of the bridge’s piers that create imposing concrete towers, topped by overhead galleries embellished with architectural and sculptural details. Pierced railings create a visual shutter so that at a speed of 50 km an hour, motorists see through them with an uninterrupted view of the harbour.

Named after the long-time commissioner of Toronto’s public works, The R. C. Harris Water Treatment Plant in Toronto, Ontario, was designed by Thomas C. Pomphrey, of the engineering firm Gore, Nasmith and Storrie, and was largely built between 1932 and 1937. It opened in 1941. Unlike most modern engineering structures, the building was also created to make an architectural statement. It remains one of Toronto’s most admired buildings earning it the nickname “The Palace of Purification” and a National Historic Civil Engineering designation in 1992.

Built by architect Ernest Cormier as his own residence in 1930-31, Cormier House, in Montreal, was proclaimed as a historical monument in 1974. Cormier also created most of the furniture to marry with other pieces he acquired at the 1925 Exposition Internationale des Arts Décoratifs et Industriels Modernes in Paris.

Also designed by Ernest Cormier, the Supreme Court of Canada building in Ottawa was built in 1939. The building is characterized by extensive decorative elements, which range from the two candelabrum-style fluted metal lamp standards that flank the entrance, to the marble walls and floors of the grand interior lobby.

Built in 1936, as part of a Depression-era program to create employment and consolidate federal government services, Regina’s modest Dominion Building, with its four-storey central tower, was erected on a site that was once home to the courtroom in which the 1885 trial and sentencing of Louis Riel took place.