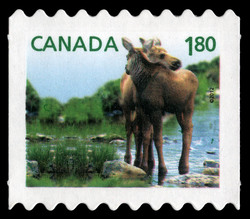 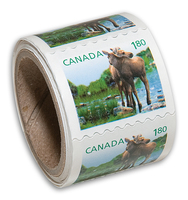 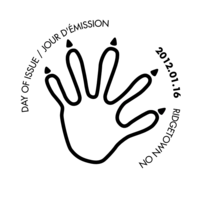 Babies are irresistible. It’s Mother Nature’s wise and wily way of ensuring the survival of any species. The wildlife babies in this year’s set of definitive stamps, the second in the current multi-year series, are no exception, with each one displaying some endearing youthful trait that will ensure the recognition and emotional response of both parents and animal lovers everywhere.

The hinterland comes to life on these new stamps, with a glimpse at a variety of animal youngsters. Three curious, wide-eyed baby raccoons peek out from behind the crux of a tree on the domestic-rate, PERMANENT™ stamp. Two caribou wobble bambi-like on the US-rate stamp and baby loons—unrecognizable without their adult markings—take a ride on Mom’s back on the oversized mail-rate stamp. Lastly, a couple of moose affectionately nuzzle each other on the international-rate stamp.

Designers Monique Dufour and Sophie Lafortune chose photography, as they did for the previous year’s stamps, to capture the tenderness and playfulness of this year’s fascinating babies. The patently Canadian animals are all shown once again in their natural habitat. The charming tots in this year’s Baby Wildlife stamps tug at the emotions, and will make both collectors and consumers alike smile—and hopefully encourage us all to learn more more about these tiny creatures.

Raccoon kits are born helpless in the spring, but just six short weeks later, they can walk, climb and wrestle with their siblings. The kits are raised by their mother over the summer, and are able to forage on their own by the fall. A common sight in rural and suburban areas, the raccoon’s bandit-mask and agile front paws have enhanced its reputation for mischief.

Despite their knobby knees and big feet, caribou calves are able to travel within a few hours of birth, allowing them to move quickly with the herd to find new grazing areas. There are more than two million caribou in Canada, and herds can sometimes number in the tens of thousands. Both males and females grow antlers. Adult bulls shed their antlers inNovember after the rutting season, while females often keep theirs through the winter.

Loon chicks are able to swim right after hatching, but often ride or rest on the back of their mothers in their first weeks to stay warm and reduce the risk of predators. The adult loon can dive to depths of 80 metres and stay under water for up to a minute. To many, the haunting and distinctive sound of a loon is symbolic of Canada’s backcountry.

Moose calves, born with reddish fur, remain with their mothers—who are solely responsible for their care—until just before the next calf is born. The mother will instinctively keep her calf hidden until he or she can run fast enough to elude predators. Second only in size to the bison in North America, moose are solitary animals and do not form herds. Normally quite unhurried, a startled or provoked moose can become surprisingly fast and aggressive. During mating season in the fall, the smashing of the enormous, distinctive palmate antlers of the bull moose as they compete for females makes for thunderous, spectacular fights.

According to Stamp Design Manager Danielle Trottier, “For decades, Canada Post has depicted many kinds of native Canadian wildlife on our stamps. We’ve used these stamps to inform Canadians about the animals that roam our fields and forests and to inspire a sense of pride in the wild and majestic beauty of our country’s creatures. We’ve even used animal images on our stamps to create awareness of the dangers to habitats that can put whole species at risk, with our Endangered Animals series a few years ago.”

“But,” added Trottier, “This time, we wanted to do something totally different; we wanted to look at the animals from an unusual perspective. We realized that we had never shown the animals at such an early age.” She understands why this series has been well-received. “These babies provide us with absolute charming images; we can see them also appealing to young collectors or youngsters who are learning to write letters to Grandma or a pen pal. It’s a really fun and fresh way to approach the making of definitives.”