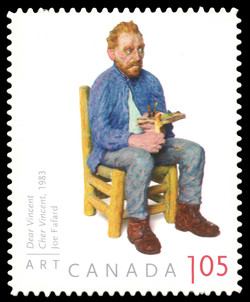 The hidden date for this stamp can be found on the chair between the man's feet. 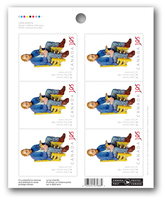 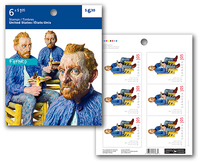 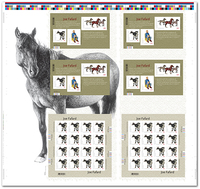 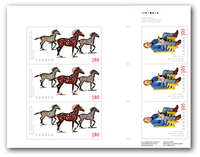 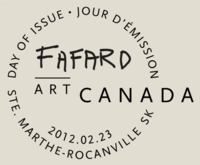 Terrence Heath, writing on the diversity and evolution of Joe Fafard’s career, says:

“First, there is the succession of materials used – plaster, earthenware, bronze, steel. There are also changes in scale, from less than life size than to more than life size, but never exactly life size. Then there is the variety of themes, from specific to universal, from the perceived to the imaginary, from the statement to the revelation.”

Born and raised in the French-speaking community of Ste. Marthe-Rocanville, Saskatchewan, Canadian sculptor Joe Fafard is well known for creating art inspired by prairie farms and small towns, as well as his relatives, artists, writers and politicians.

After graduating with a Bachelor of Fine Arts from the University of Manitoba in Winnipeg in 1966, Fafard went on to complete a Master of Arts at Pennsylvania State University in 1968. While studying close to New York City, he spent much time at the Metropolitan Museum of Fine Art and the Museum of Modern Art. He was inspired to explore ceramics while teaching sculpture and pottery at the University of Saskatchewan in Regina. Fafard settled in Pense, Saskatchewan, in 1971, and in 1974, he resigned from teaching and devoted all his time to sculpture. He earned his first large commission, the Toronto Dominion Bank’s new public art installation in 1984, and in 1985, opened his own foundry, Julienne Atelier Inc.

The subject of several documentaries, Joe Fafard was named an Officer of the Order of Canada in 1981. He received the Royal Architectural Institute of Canada Allied Arts Award in 1987, the Saskatchewan Order of Merit in 2002, and the Lieutenant Governor’s Saskatchewan Centennial Medal for the Arts in 2005. Mr. Fafard also holds honorary doctorates from the University of Regina, granted in 1989, and from the University of Manitoba, granted in 2007.

The stamps in the 2012 Art Canada issue showcase a variety of the artist’s oeuvre. Fafard’s popular bovine sculpture, Smoothly She Shifted, grazes on the domestic PERMANENT™ stamp; Dear Vincent, depicting a sitting Van Gogh, is found on the U.S. stamp, while the International stamp shows Capillery, a racing trio of lasercut steel and bronze horses. This piece began its life as a maquette for the later work, Running Horses. The domestic OFDC, shows Fancy, a highly detailed charcoal drawing of a horse.

According to designer Hélène L’Heureux, “Until now, the Art Canada series has showcased two-dimensional paintings. This series on the sculpture of Joe Fafard provided an additional challenge: first, to select three flagship works representative of the artist’s versatility; then, to present the three works from the right angle-of-view, to capture the essence of the three images while allowing them to coexist on the souvenir sheet. So the photography work was of key importance. The camera had to capture the best angle for the formal layout and also to showcase the details of each of sculpture.”

Completing the uncut press sheet provided a further challenge. Says L’Heureux, “The souvenir sheets and panes of 16 stamps had to be grouped together based on perforation requirements and integrated into an environment that adds to the series. As well, the booklet and sheetlet covers provide an opportunity to highlight other details of the works feature. Meeting all these challenges was very gratifying.”

“I can’t put a finger on what compels me to make these things, but I keep doing it anyway. Well, it is a good way to live and make a living. I’m quite happy about it!”

Stamp Design Manager Alain Leduc and designer Hélène L’Heureux had the good fortune of meeting Joe Fafard at the photo shoot for all three stamps at the Musée des beaux-arts de Sherbrooke earlier this year. Not only did this make it possible to shoot all necessary pieces in the same session, their brief discussions with the artist added an additional level of inspiration to the design approach. According to Alain, “It’s unusual—and quite thrilling—for us to have the opportunity to depict sculpture. And meeting the artist added much to the entire creative experience.”

In addition to the three pieces of sculpture chosen for the three stamps, the overall design also reflect the artist’s mastery of a variety of media. The inclusion of the charcoal portrait of the horse Fancy (1980) into the design of the First Day Cover and uncut press sheet symbolizes part of this range.  “This addition,” notes Leduc, “not only shows the breadth of the artist’s talents and range of subject matter, but also demonstrates his attachment to this animal, something that has inspired so much of  Fafard’s work.”

This stamp issue is not the only time Joe Fafard has had some connection to Canada Post—or more specifically, the Canadian Post Office Department . From April of 1951 to October 31, 1969, Joe Fafard’s father, Leopold Victor Fafard, was the postmaster for the small town prairie post office of Ste. Marthe-Rocanville, Saskatchewan. While that post office no longer exists, as a means of honouring both Joe Fafard and his father, we have chosen Ste. Marthe-Rocanville as the honourary cancellation site of the issue’s Official First Day Cover.