Centennial of the Sinking of the Titanic 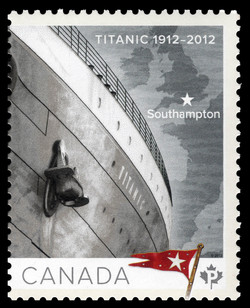 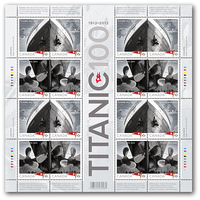 Long before James Cameron called for "action" on the set of the movie Titanic, Canadians were involved with the world's most famous ocean disaster. In addition to a number of Canadians aboard, and the tireless efforts of the people of Halifax, it was a team of employees working at the Canadian Marconi company's wireless station on Cape Race, Newfoundland, who heard the early distress call.

The RMS Titanic's story has been told again and again. More than two thirds of the ship's passengers and crew met their end that night, in part because the ship didn't have enough lifeboats. And while it's believed that the J.P. Morgan-owned White Star Line never advertised the Titanic as being "unsinkable," the irony—and the term—has dogged the sunken ship for a century.

Says Jim Phillips, Director of Stamp Services, "We typically do not commemorate tragedies. But we wanted to speak to how the people of Halifax rose to meet the grim duty placed on them. The recovery ships were local, as were the morticians and clergy who dealt with the victims. More than 150 of the dead, many of them unnamed, were laid to rest in three of the city's cemeteries—and Halifax was the focus of the world's press."

So how do you accurately create detailed images of a ship that's been under water, out of view for a century? Says designer Dennis Page, "Being based in Halifax, I began the project with visits to the Titanic grave sites. Then the Maritime Museum of the Atlantic became our most important resource. The Museum's Titanic collection was inspirational and I developed a relationship with then museum curator Dan Conlin, who is a living and breathing encyclopedia of Titanic history and details."

Page continues, "Luckily, there was a full-scale model of Titanic being built at the time, based on the most accurate contemporary drawings ever produced. Access to these plans allowed us to be certain about details we couldn't see clearly in old, poorly lit, black and white photographs."

Illustrator Mike Little knew the stamps would be examined closely by both collectors and Titanic enthusiasts. "Since even the most stalwart enthusiasts can't agree on the authenticity of many details, I hope these illustrations do justice to a subject that has become a cultural icon recognized throughout the world."

"The bow and stern images were based on existing photographs of the Titanic and one of her sister ships the Olympic. They were to be as photorealistic as possible," he notes. "One of the main areas of interest on the bow was the anchors, but they were obscured by shadow. Luckily I found a lot of visual information about the anchors and was able to rebuild them in 3D and incorporate these into the main illustration. The same technique was used for the propellers".

Little continues, "The full colour side illustration of the Titanic was much more of a challenge. No photographic record of a straight on side shot with all of the detail needed exists. Again, that's when the plans became essential."

This issue includes five stamps in total, two se-tenant domestic issues showing both the bow and stern of the ship, and one international stamp showing a side view of the ship. In addition, a souvenir sheet, an uncut press sheet, postcards and two OFDCs complete the issue.

Says stamp design manager Danielle Trottier, "When I sat in one of the replica deck chairs, I could sense both the luxury of the new ship and the terror the passengers must have felt. The people of Halifax did everything they were called upon to do—grim as it must have been—in a respectful and dignified way. That is something in which we as Canadians can feel proud."