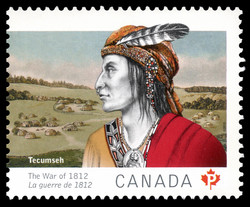 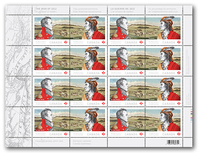 The War of 1812 was a defining moment for the provinces that would later confederate into the Dominion of Canada. The U.S. had declared war on Britain to protect their sovereignty on the high seas and in their expansion to the west. The war was fought in Upper and Lower Canada and along the Atlantic coast.

While many significant battles raged along the U.S. border in Quebec and Ontario—and many leaders arose—two of the most important were British Major-General Sir Isaac Brock and War Chief Tecumseh. This two-stamp issue, the first in a series marking the bicentennial of the War of 1812, depicts the two men face to face.

Brock, a native of the Island of Guernsey, is remembered in both Canada and his birthplace for his ability to take command. For this reason, the stamps will be Canada Post's first joint issue with Guernsey Post. Tecumseh, a Shawnee, led an Ohio-Nations confederation intent on stopping American encroachment on First Nations lands. Despite vastly different backgrounds, they worked together to take Michigan from the enemy.

In the two-stamp se-tenant format, illustrated by Suzanne Duranceau, the two men are seen in profile. Their facial expressions depict mutual respect. Alain Leduc, stamp design manager explains, “The stamp is printed in lithography but with an intaglio feel, a technique that gives the two men equal weight.”

The background of the Brock stamp shows a European settlement, as it would have looked circa 1812. Chief Tecumseh is shown with encampments scattered around him, indicating that more than one tribe has taken to arms under his command. Stamp designer Susan Scott notes that, “The setting is a visual representation of the motivation for each man—this is what they were fighting for. And the body of water speaks to the dominance of the British naval power.”

British Major-General Sir Isaac Brock, K.B., was born into a relatively wealthy family in Guernsey, in the Channel Islands. He was well-educated, provided with a commission in the British Army at the tender age of 15 and was the Lieutenant-Colonel in command of his regiment by 1798. After being posted to Canada in 1802, he took on the task of improving how British military posts in Upper and Lower Canada were defended. In 1805, he was promoted to Colonel, then to Brigadier General in 1807, and to Major-General four years later. When war was declared in 1812, he took decisive action and, together with War Chief Tecumseh, won a decisive and bloodless victory at Detroit despite being outnumbered and outgunned. Sadly he was shot and killed shortly after, while defending Queenston, in what is now Ontario.

A visionary leader and superb orator, War Chief Tecumseh united warriors from several First Nations in order to save their lands and their cultures. Born into the Shawnee Nation, he grew up surrounded by war. His father, also a War Chief, was killed by settlers when Tecumseh was a child. Trained as a warrior and skilled at motivating others to follow him, his goal was to create a confederacy of First Nations that would stop American expansion. Once the Americans declared war in 1812, Tecumseh and his confederacy supported the British in exchange for their help establishing and protecting native-held lands. Tecumseh was killed at the Battle of the Thames on October 5, 1813—the only battle he fought in what is now Canada.