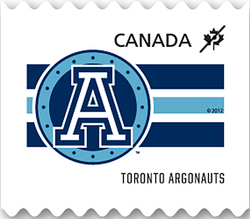 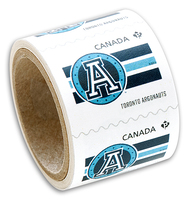 The 38th Grey Cup Game pitted the Argonauts against the Winnipeg Blue Bombers. Known as the Mud Bowl, this game was almost as famous for the football field as it was for the players.

The day before the game, an unexpected snowfall covered Toronto. On game day, warmer weather and heavy rain hampered efforts to remove the snow at Varsity Stadium. By kick-off, the playing field was a soaked and muddy mess. Rain fell throughout the game and the low score came as no surprise. Only one touchdown was scored in the entire game and Toronto prevailed 13-0, the last shutout in a Grey Cup Game.

After a Grey Cup win in 1952, over Edmonton, the Argonauts did not return to the championship game until 1971, which they lost to Calgary 14-11.

Toronto’s next Grey Cup victory would happen in 1983, when Toronto beat the BC Lions 18-17, denying BC’s hometown fans at BC Place Stadium in Vancouver.

The 79th Grey Cup was particularly sweet for the Argonauts following the revitalization of the franchise with new owners Bruce McNall, Wayne Gretzky, and John Candy. The acquisition of Rocket Ismail added to a potent offence that defeated Calgary 36-21 in Winnipeg – the coldest Grey Cup game on record.

After a 4-14 record in 1995, the 1996 Argos made an amazing turnaround and went 15-3, storming their way to the championship game. Quarterback Doug Flutie guided the team to a 43-37 Grey Cup romp over Edmonton in a snowy game in Hamilton’s Ivor Wynne Stadium.

Repeating as champions is one of the most difficult accomplishments in professional sports. The 1997 season saw the emergence of speedy receiver SB Derrell Mitchell who helped lead the Argos to another 15-3 season. At the East Final in Toronto, Michael Clemons was the hero catching the game-winning TD with just 40 seconds on the clock. The Argonauts defeated the Saskatchewan Roughriders 47-23 in the Grey Cup.

Toronto claimed the 92nd Grey Cup, 27-19 over BC, with veteran quarterback Damon Allen calling the shots.

With 15 Grey Cup wins in 21 appearances, the Toronto Argonauts have the best Grey Cup record in the CFL®.