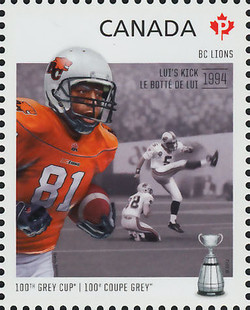 BC Lions - Booklet of 10 stamps

The BC Lions™ played their first CFL® season in 1954, and have represented Canada’s West Coast ever since. They played at Empire Stadium in East Vancouver until 1983, when they moved indoors to BC Place Stadium in downtown Vancouver.

The Lions have played in ten Grey Cup® games and brought the Cup home six times, but it took 11 seasons in the League before BC finally got to raise the Grey Cup in 1964. The Lions started that year on a 10-0 tear, rolling through the playoffs and dominating Hamilton in the final by a score of 34-24. Diehard BC fans hold up the 1964 season as the greatest in franchise history.

BC dominated the League in 1985, with a 13-3 regular season record. Veteran Mervyn Fernandez was the CFL’s Most Outstanding Player that year while defensive tackle Mike Gray won Most Outstanding Rookie honours. Quarterback Roy Dewalt drove the team to a 37-24 Grey Cup victory over Hamilton.

In 1994, BC did more than just win the Grey Cup; the Lions ensured that the Cup remained on Canadian soil. The upstart new franchise in Baltimore, Maryland, made it to the championship game, but a last second field goal by Lui Passaglia won the game 26-23 for BC in front of delirious hometown fans.

The 88th Grey Cup also belonged to the BC Lions. After rebounding from a 5-9 start to the season, the Lions clawed their way into the Grey Cup Game and capped one of the greatest turnarounds in team history with a 28-26 triumph over Montréal.

Six years later, BC found itself raising the Grey Cup again. Led by record-setting wide receiver and CFL Most Outstanding Player Geroy Simon, the team ricocheted from a 2-3 start to storm into the playoffs with 13-5 season record. BC upended Montréal 25-14 in the championship game.

Following a tough 0-5 start in 2011, the Lions rallied to an 11-7 regular season finish and capped a historic year with a 34-23 win over the Winnipeg Blue Bombers in front of hometown fans at BC Place to capture their sixth Grey Cup title. With the victory, BC Head Coach Wally Buono tied a CFL record with his fifth Grey Cup win, capping an illustrious coaching career.

With legendary players like Lui Passaglia, By Bailey, Joe Kapp, and Willie Fleming, as well as many Grey Cup victories, the BC Lions have a rich history that has thrilled its fans for 59 years.