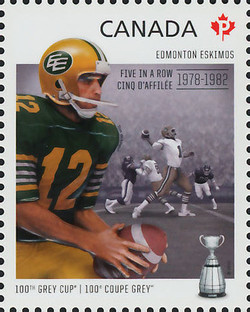 The green and gold of the Edmonton Eskimos™ has been part of the CFL® for more than 60 years. The team wasted no time establishing itself as a League powerhouse; winning a string of three consecutive Grey Cups from 1954 to 1956 with great players like Jackie “Spaghetti Legs” Parker, Normie Kwong, Rollie Miles, Johnny Bright, and Don Getty. The 42nd Grey Cup® featured Jackie Parker’s famous fumble recovery and subsequent 90-yard touchdown, one of the most famous plays in Canadian sports history.

The Eskimos wouldn’t raise the Grey Cup again until 1975, when they rode a League-leading 12-4 regular season record to a championship game appearance. Kicker Dave Cutler scored all of Edmonton’s points en route to a 9-8 victory over Montréal.

Beginning in 1978, Edmonton set out on what would become an awe-inspiring five-year Grey Cup dynasty. With the stellar defensive play of Dan Kepley and Dave Fennell as well as the electrifying offense generated by quarterback Warren Moon; the Eskimos dominated the CFL for half a decade, and the dynasty helped Edmonton become known as “City of Champions.”

The year 1993 brought the Grey Cup home to Edmonton for the 11th time. The Eskimos won their last eight games, including a 33-23 Grey Cup victory over Winnipeg. Kicker Sean Fleming scored 21 of Edmonton’s points, earning him Most Valuable Canadian in the Grey Cup.

In 2003 and 2005, the Eskimos met Montréal in the championship game both times. The stellar play of Mike Pringle, Terry Vaughn, Jason Tucker, and Ricky Ray kept Edmonton fans on their feet all the way to two Grey Cup victories.

With 13 Grey Cup wins in 24 championship game appearances, the Edmonton Eskimos are one of the CFL’s most successful and perennially competitive teams.