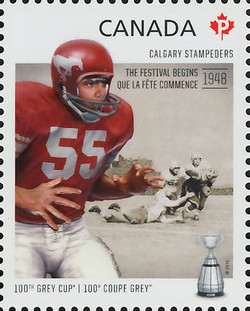 The first Calgary Stampeders Grey Cup® appearance was in October 1948, against the Ottawa Rough Riders, but the Stampeders have many football ancestors going back as far as 1906; the Tigers, Canucks, Fiftieth Battalion, Altomah-Tigers, Altomahs, and Bronks were all predecessors who helped shape the game of Canadian football.

In 1948, the Stampeders capped off a perfect 12-0 regular season record with a 12-7 victory over Ottawa in the Grey Cup. Jubilant Calgary fans travelled in droves to Toronto, and their spirited activities, such as riding a horse through the lobby of Toronto’s Royal York Hotel, turned the Grey Cup into the Canadian cultural event it is today.

After Grey Cup losses in 1968 and 1970, Calgary didn’t let the championship game of 1971 slip away, winning 14-11 over Toronto. Linebacker Wayne Harris was named the game’s Most Valuable Player. Defensive end Dick Suderman was the top Canadian.

After the lean 1980s, the arrival of quarterback Doug Flutie in the early 90s turned the Stampeders’ fortunes around. Flutie was CFL® Most Outstanding Player from 1992 to 1994. Calgary won the 80th Grey Cup over Winnipeg by a score of 24-10. A return to the championship game in 1995 resulted in a 37-20 loss to Baltimore, but for the third time in three Grey Cups, Stampeder slotback Dave Sapunjis won honours as top Canadian.

Calgary won its fourth Grey Cup in 1998, over Hamilton with a last second field goal by Mark McLoughlin. Stampeder quarterback Jeff Garcia was MVP of the game.

In 2001, Calgary raised the Grey Cup again, winning in a 27-19 upset over the heavily favoured Winnipeg Blue Bombers in Montréal’s Olympic Stadium. Aldi Henry was top Canadian after blocking a crucial Winnipeg punt resulting in a Stampeder touchdown that put Calgary ahead for good.

The Stampeders’ most recent Grey Cup win was in 2008, when they defeated Montréal 22-14. Quarterback Henry Burris was named MVP of the game, while kicker Sandro DeAngelis, the top Canadian, kicked five field goals.

Calgary has had more than its share of great players: middle linebacker Wayne Harris, linebacker Alondra Johnson, running back Willie Burden, receiver Allen Pitts, among many others. Calgary has six Grey Cup wins in 12 appearances.