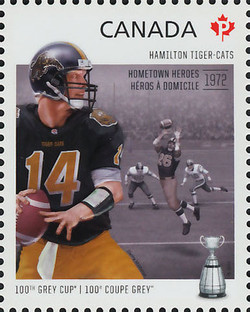 Hamilton’s football roots trace back to 1869, when the Hamilton Football Club was born. The club has won the Grey Cup® 15 times as the Hamilton Alerts, the Tigers, the Flying Wildcats and in 1953, for the first time as the Hamilton Tiger-Cats*.

The late 1950s and early 60s were great years for the Tiger-Cats. Starting in 1957, Hamilton made nine Grey Cup Game appearances in 11 seasons and the team won the Cup four times.

Two future Canadian Football Hall of Famers also shone in the 60th Grey Cup Game: Angelo Mosca in the final game of his career and Garney Henley, the CFL®’s Most Outstanding Player in 1972.

After heartbreaking Grey Cup losses in 1984 and 1985, the Tiger-Cats finally prevailed in 1986, defeating the Edmonton Eskimos 39-15 in the championship game. In a dominant performance at both ends of the field, Hamilton jumped out to a 29-0 halftime lead and never looked back. They also amassed ten sacks and forced eight turnovers over the course of the game.

In 1999, Hamilton claimed its 15th and most recent Grey Cup title by beating the Calgary Stampeders 32-21. Once again, the Tiger-Cats started strong from the opening kick-off, building a 21-0 halftime lead, holding firm against all of Calgary’s attempts to get back into the game.

Hamilton has had enthusiastic football fans for more than 140 years and the Tiger-Cats look to give them thrills for many years to come.