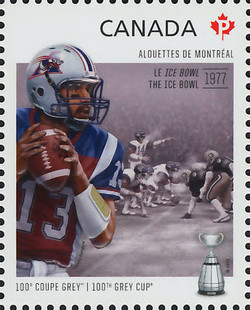 Montréal’s football roots wind all the way back to the 1870s, when the Montréal Foot Ball Club was formed. Various teams from the city competed for the Grey Cup®, and the Montréal Winged Wheelers were the first to win it in 1931.

The Montréal Alouettes™ were formed in 1946. They won their first Grey Cup in 1949, after just three years of competing, defeating Calgary 28-15.

Montréal’s next Grey Cup triumph would come in 1970, when a rejuvenated team led by quarterback Sonny Wade beat Calgary 23-10. This championship would launch arguably, the most successful decade in the Alouettes’ history, with three Grey Cup wins in six appearances. In 1974, the team won the championship 20-7 over Edmonton.

The Alouettes’ most memorable Grey Cup victory came in 1977, against Edmonton in front of more than 68,000 hometown fans at Olympic Stadium. Known as the Ice Bowl, this championship game took place just days after a blizzard. After stadium crews used salt to melt snow on the field, a temperature drop on the day of the game froze the field into ice. As both teams struggled with the field conditions, Montréal defensive back Tony Proudfoot came up with a brilliant idea; he put staples into the soles of his shoes for better grip. He quickly shared the idea with his teammates, and soon, his team had the upper hand on the Eskimos. The Alouettes dominated for the rest of the game and won the 65th Grey Cup 41-6.

Following the upheaval of the 1980s; flirting with bankruptcy, renaming the team the Concordes, the folding of the team in 1987, and the absence of a CFL team in Montréal for nine years, the Alouettes were reborn in 1996.

In 1998, Montréal signed free-agent quarterback Anthony Calvillo, and the team has never looked back. Since 2000, the Alouettes have reached the championship game eight times and won three Grey Cups, including two in a row in 2009 and 2010.