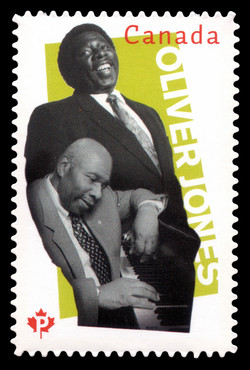 The hidden date for this stamp can be found on the piano keys. Born in Montréal’s Little Burgundy neighbourhood in 1934, to Barbadian parents, Oliver Jones put on his first show at the age of five. By age eight, he was taking formal music lessons – from Daisy Peterson no less, sister of famed pianist Oscar Peterson. By his early twenties, Jones was a musician for hire. After travelling to Puerto Rico to play in the Kenny Hamilton Review and the Oliver Jones Quartet – a gig he continued for 16 years – he returned to Montréal in 1980, and in 1983, released his first jazz album, The Oliver Jones Trio.

Since then, Jones has toured the world, produced more albums and won many awards, including five Junos, four honorary doctorates, and the Ordre national du Québec. In 1994, he was invested as an Officer of the Order of Canada.

“Over the years I have been the very fortunate recipient of numerous awards and accolades,” explains Jones. “I thought I had achieved everything that I set out to do. When I was contacted by Canada Post I could not believe that I was chosen for this great honour – I am so proud, and to be part of the Black History series is especially thrilling.”

Designer Lara Minja explains the two images on the stamp: “The animated photograph of Jones laughing contains within it a more recent and subdued image of him at the piano, balancing the earlier days of his career with his current performances. The two photographs also illustrate Jones as both an individual and a performer. The first reflects his early career, while the second pays homage to the longevity and enduring popularity of his music.”