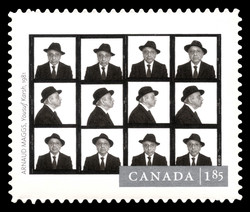 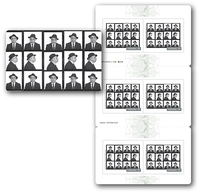 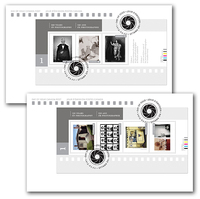 Even in its early days, Canada offered a wealth of inspiration for photographers. From its scenic beauty to its nascent urban landscapes, from politicians to powerbrokers, from aboriginals to early immigrants, the country’s early diversity played muse to some of the world’s most recognized photographers. From William Notman to Yousuf Karsh, Margaret Watkins to Gabor Szilasi, Canada has been home to photography masters who are too often better known outside of the country than within its borders. But that situation might be about to change thanks to a new multi-year series from Canada Post.

Canadian Photography, which will take the place of our annual Art Canada stamps, will look at the last century and a half of photography by Canadian photographers. According to Stamp Design Manager Alain Leduc, “I see this series as a continuation of Art Canada – these are masters of the art of photography – but we’ve changed and freshened up the design and the format to better suit the medium.”

background work for the series began more than two years ago, framed by the challenge of showcasing the best Canadian photography from Confederation to the country’s sesquicentennial in 2017. Faced with the massive task of choosing what images would be included, Leduc brought together some of the best minds in the Canadian art photography world to help select images for the series. He looked to curators and photography critics and writers who have spent their careers discovering both new and lost artists. Says Leduc, “Over and over, the same names and the same titles would arise from conversations and lists. That told me we were truly coming to some consensus on the best of the best.” Of this select group of photographs, seven appear on this issue’s five Permanent™ domestic rate stamps, one on the U.S. stamp, and one on the International stamp.

In a move from the more traditional gum-backed pane format used for Art Canada, this photography series will arrive in the form of self-adhesive books of ten (two of each of five stamps) for the domestic rate, and booklets of six for both the U.S. and International rates. Additional photographs – also from the seven photographers whose images were chosen for the stamps – will grace the booklet covers and selvedge. There will be two Official First Day Covers for this issue – one to accommodate the vertically-oriented shots and one for the horizontal pieces.

Leduc adds, “Instead of one or two images by a particular photographer each year, we treated the photography we selected as art pieces, combining those choices to produce an annual gallery of the best of the best.”The selection of these images was a gargantuan task, one that needed to be approached with expertise, knowledge and balance. To select the photography for the series, Leduc’s virtual photography task force included the following: Karen Love, Manager of Curatorial Affairs at the Vancouver Art Gallery; David Mattison, BC Archival Network Service, Archives Association of British Columbia; Ann Thomas, Curator of Photography at the National Gallery; Maia Sutnik, Curator of Photography at the Art Gallery of Ontario; Nora Hague, Senior Cataloguer, and Hélène Samson, Curator, both of The McCord Museum’s Notman Collection; Lorraine Monk, photography curator and author who spent two decades as the executive producer of the Still Photography Division at the National Film Board; Mario Béland, Curator of Historical Art and Photography at the Musée national du Québec; and Lilly Koltun, internationally known art and photography historian, Adjunct Research Professor in Fine Art History at Carleton University and former Director General of the Portrait Gallery at Library and Archives Canada.

The work of Arnaud Maggs, known for his 48 views of Yousuf Karsh, graces the International rate stamp, while Rodney Graham’s Basement Camera Shop appears on the U.S. rate stamp.

Leduc concludes that in the development of the series, the group rejected typical parameters of Canadian photography, choosing instead the best work of photographers who identified as Canadian, whether by birth or by choice, as well as photographs that were shot within Canada, and those that demonstrated a Canadian vision of the larger world.