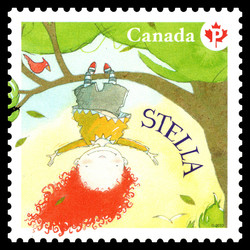 The second stamp in our Children’s Literature series honours author and illustrator Marie-Louise Gay and the imaginative and intrepid young Stella she brings to life with exquisite watercolours.

Stella, her brother Sam and their pet dog Fred explore the world around them, bringing readers along on their many adventures. The three spend a day in the forest, where Stella answers Sam’s questions about the forest’s inhabitants. They take a nocturnal walk to explore the moon and the stars in the company of racoons, fireflies and bats. They enjoy a winter escapade, complete with snowballs, snow angels, and snow-covered trees.

Marie-Louise Gay, one of Canada’s best-loved creators of children’s books, has published more than 60 titles and achieved international acclaim for her work. She has won many awards for her books, including the Governor General’s Literary Awards and the Marilyn Baillie Picture Book Award, and has been nominated for the Astrid Lindgren Memorial Award and the Hans Christian Andersen Award.

Canada Post had an opportunity to ask Marie-Louise Gay a few questions about her work and her involvement with this new stamp issue.

What’s it like to have your artwork appear on a stamp?
It’s a great honour that my art has been chosen to appear on a stamp. I think it’s a sign that the art created for children’s books is recognized as an important and inspiring medium that leads to visual literacy and changes one’s vision of the world.

What went through your mind when Canada Post proposed a stamp featuring the Stella series?
I was thrilled to learn that my work had been chosen. It was totally unexpected. I had never imagined that I would see the characters that I had created and nurtured on a stamp.

Are there elements of Stella’s character you’re happy to see highlighted with the artwork?
Stella’s personality – her enthusiasm, sense of adventure, and delight – shines on the stamp that features her hanging upside down from a tree. On the other stamp, we see her relationship with her brother Sam through their shared pleasure of reading together. I think their relationship is very important to the Stella stories. Through it, we explore the personalities of Stella and Sam and the way their relationship is familiar to all children. Stella is the older sibling, bolder, more knowledgeable, inventive and protective of her younger, more timid sibling, who can be fearful sometimes, but is always curious and trustful of his sister.

Can you talk about about Stella’s upcoming adventures?
There is a new book coming out in August – Read Me A Story, Stella – in which Stella and Sam spend a lovely day building a doghouse for Fred, picnicking at Lily Pond, trying to capture frogs and caterpillars and teaching Fred to fly a kite. Woven throughout the adventures of the day are the stories that Stella reads to Sam.

How do you think boys and girls will react to seeing Stella – a familiar face – on their letters?
I hope it will send them rushing to their bookshelf or to the library to dig out their Stella and Sam books and read them over again.