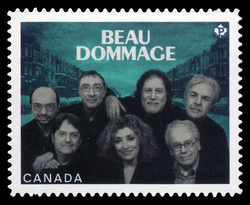 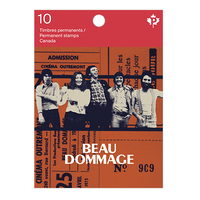 Beau Dommage
Pierre Bertrand, Pierre Huet, Robert Léger and Michel Rivard wrote their first songs when they were in university, performing in intimate, smoke-filled rooms or boîtes à chansons where many young Quebec singers got their start.

Mutual admiration for one another’s work led the group to join forces, and Beau Dommage was born. Named for a common or colloquial expression meaning “you bet,” the group flourished with the addition of Marie-Michèle Desrosiers, Réal Desrosiers, and later, Michel Hinton.

Beau Dommage made a strong name for itself with its self-described “folk-rock-urban” sound, rich harmonious vocals and lyrics rooted in the Québécois culture. The band’s first album, which was self-titled, sold hundreds of thousands of copies – and its second, Où est passée la noce?, achieved equal success.

Over the course of its existence, Beau Dommage won numerous prizes and awards, including double-platinum status, Félix trophies, and a Billet d’or recognizing strong ticket sales for its live performances. It was the first band ever to receive a medal of honour from the National Assembly of Quebec.