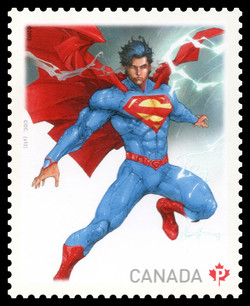 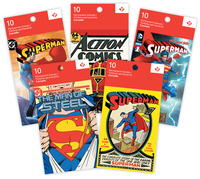 Kosta Tsetsekas, Principal at Vancouver’s Signals Design, grew up reading comic books. In fact, he notes, “That’s how I learned to speak English as a nine-year-old immigrant.”

In the mid-20th century, being from another place was something many Canadian kids had in common with Superman, who was an immigrant from another planet. The ultimate hyphenated citizen, the Canadian-American-Kryptonian superhero distinctively represented the Canadian outsider’s point of view and the values of diversity, justice and tolerance.

Seventy-five years ago, Superman burst out of the teenage imaginations of Toronto-born artist Joe Shuster (first cousin of famous funnyman Frank of the Wayne and Shuster comedy duo) and Cleveland’s Jerry Siegel. The boys – outsider intellectual Jewish kids in a tough Midwestern town – created a fantasy superhero that no one dared tease or push around. Sadly, Superman’s ability to repel and outrun bullets perhaps originated in Siegel’s grief over the death of his own father, who had been shot and killed while defending his business from a robbery.

Superman was introduced to what would soon be droves of adoring fans in Action Comics #1, in 1938. Our hero had been trapped in the slush pile at National Comics until he eventually found his way into a new magazine called Action Comics. By the time Action Comics #4 hit the stands, readers couldn’t get enough of Superman.

Just how Canadian is the Man of Steel?
He’s Canadian enough to be featured in a “Heritage Minute” – the beloved 60-second history lessons that aired as popular fillers on Canadian TV screens. Look closely at the skyline of Metropolis, the setting of the Superman tales, and it’s apparent that depression-era Toronto provided some inspiration for the imaginary city that was the setting for Superman’s adventures.

The Daily Planet, where Superman’s alter ego Clark Kent makes a living as a reporter with Lois Lane and Jimmy Olsen also has its origins in Toronto. As a young boy, Shuster had an afterschool job at what is now The Toronto Star (founded in 1892 as The Evening Star and renamed The Toronto Daily Star in 1900). The original name for The Daily Planet, later changed by the editors, was The Daily Star. And one can only speculate that the Planet’s tough talking, yet ethical editor-in-chief, Perry White, was inspired by the social conscience of Joseph “Holy Joe” Atkinson, the Star’s editor from 1899, until his death in 1948. Even the towering, obelisk-inspired headquarters of The Daily Planet had an uncanny resemblance to the Star’s original home at 80 King Street West.

A heroic issue
This six-stamp issue – composed of one commemorative coil and five commemorative stamps featuring period images of Superman over the past 75 years – showcases the wealth of talent that has recreated and refreshed Superman’s image over the years.

The coil features the immediately recognizable image of the stylized “S” logo. This particular image is taken from the 1986 cover of the Special Collector’s Edition of Man of Steel #1, which was drawn by John Byrne. Ten commemorative stamps (two of each design) are included in five separate booklet covers. They illustrate both the progressive development of Superman’s visual identity and the growing sophistication of comic-book art.

A labour of love
When the stamp designer is a fan of the topic at hand, magic happens. According to designer Kosta Tsetsekas, “I was the most excited person in the studio when Danielle [Trottier, recently retired Stamp Design Manager at Canada Post] approached us with news of the Superman project. I felt like a kid again.”

Tsetsekas acknowledges that both the wealth of imagery available and the superhero’s strong fan base made for high expectations. “Superman has a 75-year history of iconic imagery. Our biggest challenge was to arrive at a compelling narrative using only six stamp images to tell that story,” he says. “With the selected imagery, we’ve tried to show the evolution of the Superman character by showcasing some of the most memorable artists and eras up to and including the present day.”

Exuding the excitement and anticipation of a typical fan of the Man of Steel, he adds, “I am so looking forward to having the uncut press sheet framed and hanging in my home.”