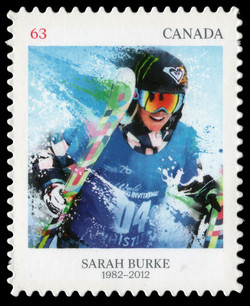 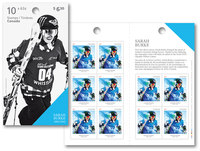 In a year when Canadians will be focused on winter sports excellence, Canada Post is shining the light on three history-makers and record-breakers. Each woman honoured in this set of stamps has changed the face of her sport and left an indelible mark on the memories of her fans.

Louis Gagnon, Creative Director and Partner with Montréal’s Paprika, explains that the three stamps were designed to have a classic memorial look. "The illustrations represent the athletes in full action, which contrasts with the simplicity of the design," he says. "The vibrant, powerful style reflects the prowess of the three champions. The setting features an element that reminds us of the athlete’s sport – and the colour scheme is influenced by the colours of the Olympic logo."

According to Stamp Program Manager Elia Anoia, both the production process and the final result are also dependent on the cooperation and involvement of the families, foundations and archives that act as keepers of the memory of the women recognized here. "This can be an emotional process for the family, particularly if the loss is a recent one. We hope that it’s a positive and healing experience, a chance to remember the best of times – the families are thrilled by the fact that we are honouring these Canadian women with a stamp."

Sarah Burke
Born in Barrie, Ontario, in 1982, freestyle half-pipe world champion Sarah Burke was the first woman to land a 1080-degree spin in competition. She took the 2007 ESPY Award for Best Female Action Sports Athlete, and won four gold medals at the 2011 Winter X Games, plus one more at Europe’s Winter X Games. She also successfully lobbied for the inclusion of her sport in the Sochi 2014 Winter Olympics. The OFDC is cancelled at Whistler, British Columbia, where Burke spent much of her time training and coaching.