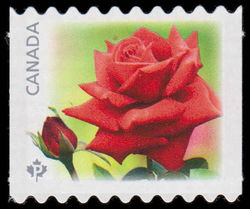 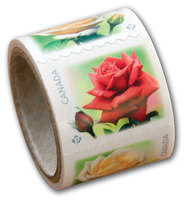 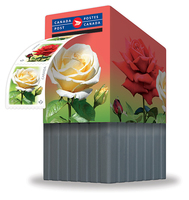 The rose has captured and mended hearts for centuries and been celebrated widely in literature, music and art. A perennial member of the genus Rosa, from the Rosaceae or Rose family, there are more than 100 species of roses that grow on shrubs or climbing and trailing vines. Their stems are often armed with sharp prickles – mistakenly called thorns.

Canadians look forward to our annual flower issue in the spring, and while this one comes slightly later this year, we hope you’ll think that the sheer beauty of the stamps was well worth the wait.

Designer Isabelle Toussaint photographed these blooms at the Montréal Botanical Garden. “I initially took several pictures reflecting two colours of flowers – classic red and white. But the choice was so vast that I also took dozens of pictures of other varieties, each one more beautiful than the last. Some have been used for the cover and inside the booklet, and on the Official First Day Cover and the souvenir sheet.”

Founded in 1931 by Brother Marie-Victorin, a highly regarded botanist, the Montréal Botanical Garden is recognized as a National Historic Site due to its major role in advancing botanical sciences. The 75-hectare site boasts a collection of 22,000 plant species and cultivars, 10 exhibition greenhouses, 20 thematic gardens, an arboretum and the Tree House. Part of the Montréal Space for Life, it also includes the Biodôme, Insectarium and Rio Tinto Alcan Planetarium, making it Canada’s largest natural science museum complex and one of the most popular tourist attractions in Quebec.