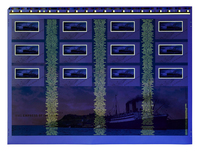 In the dark early hours of May 29, 1914, an impenetrable fog and misunderstood ship signals spelled disaster for the passengers and crew of the RMS Empress of Ireland. The ocean liner’s sudden sinking in the frigid St. Lawrence River is still Canada’s most deadly maritime disaster in peacetime.

The Empress had cast off from Québec the previous afternoon with 1,477 passengers and crew on board. It was bound for Liverpool, England, on a routine sailing – the first of the 1914 season. It was Captain Henry George Kendall’s first voyage in command of the Empress, but the vessel had been making the trip regularly since its launch in 1906.

The ship had just made a mail stop in Rimouski, Quebec, dispatched its navigator and was nearing Pointe-au-Père when the fog engulfed it. The gloom also descended on the SS Storstad, a heavy Norwegian collier, which was closer to the Empress than anyone realized. When each ship’s crew could again see the other ship’s lights, it was too late: they were on a collision course. The coal ship ripped open the hull of the Empress and frigid water poured in. Soon the Empress was over on its side, and then it slipped beneath the surface, taking all of 14 minutes to sink. More than 1,000 people lost their lives.

One of the difficulties in creating the Titanic stamps in 2012 had been the lack of authentic images of the ship, which sank on its maiden voyage. In contrast, a great many images exist of the Empress of Ireland. It was a proud symbol of the extensive Canadian Pacific Railway fleet and railway, which brought countless European immigrants to Canada. The Empress could cross the Atlantic in four days and was heavily promoted in postcards and advertisements. As well, various salvage efforts from the relatively shallow St. Lawrence produced many artifacts. These reside in official museum collections, such as the Site historique maritime de la Pointe-au-Père, and in closely guarded private collections.

Susan Scott, designer of the international rate stamp, admits too that until she was asked to submit a proposal for the stamp, she hadn’t heard of the Empress disaster – which may be the case for many Canadians. “I read David Zeni’s Forgotten Empress. I began working on ideas incorporating the sudden fog, which seemed the most significant factor in the accident. I found many photographic and painted images of the Empress reproduced on old postcards and advertising leaflets of the time – and I drove along the St. Lawrence, to get a sense of place, to study the balance of water and sky.”

According to Isabelle Toussaint, the designer for the domestic rate issue, the story of the Empress had been lost to history, even locally. “I was surprised to learn that this majestic ship was laying at the bottom of the St. Lawrence River, at approximately 300 kilometres from Québec, my hometown.”

With the domestic stamp, Toussaint explains, “We made the decision not to illustrate the tragic side of this story, but show the beauty of this ocean liner. The image chosen for the stamp brings in an interesting angle that heightens the impressiveness of the ship. We used a monochromatic palette throughout with blue-grey accents to suggest that the photo was in black and white, but also because the tragedy happened at night.”

The domestic pane of 16 stamps also includes tabs that show other aspects of travel aboard the liner. Toussaint adds, “There were so many archival photos showing the luxury of life onboard. I chose four of them to create usable tabs on the 16-stamp pane. To recognize the sinking discreetly, I used a map and an image of the buoy where the wreckage rests.”

“It’s been our policy not to mark tragedies,” says Jim Phillips, Canada Post’s Director of Stamp Services. “But in 2012, with the 100th anniversary of the sinking of the RMS Titanic, we wanted to recognize the huge role Halifax played in the aftermath. With the RMS Empress of Ireland, here was a devastating event that happened in Canadian waters, on the St. Lawrence. It had an impact on the people of Rimouski and Pointe-au-Père; it’s a big part of their history. Prior to its sinking, the ship had brought countless new Canadians to this country; it quite literally populated the Prairies. But so few people knew about it because breaking news of the First World War chased the Empress story off the front page. It was a story we had to tell and an anniversary we had to mark.”