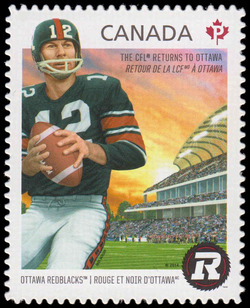 As a newcomer to the Canadian Football League™, the REDBLACKS™ will take to the field this season to carve their own chapter in Ottawa’s CFL® history. The team carries forward the legacy of the Ottawa Rough Riders and draws on the rich logging heritage of the region. This REDBLACKS issue celebrates the team in the same style as the stamps released for the 100th Grey Cup® Game in 2012, which featured a key player and a historic moment for each CFL team.

When designing the REDBLACKS stamp, Filip Mroz and David Rosenberg of Bensimon Byrne wanted to honour the team’s heritage, while looking toward the future.

“This was a chance to bring the old and new together,” explains Rosenberg. “We feature a renowned hero from the days of the Ottawa Rough Riders in dramatic stance on the left, while our moment is the new stadium – and the historic beginning it represents.”

Filip Mroz adds his thoughts,“The attention to detail paid to the uniform along with the new REDBLACKS branding encompasses both new and old,” he says. “The pairing shows that the future will be just as fabulous as the past has been.”