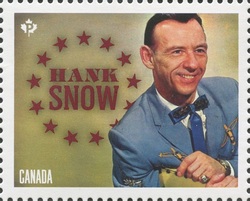 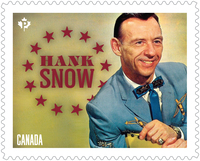 Hank Snow: Grand Ole Opry Royalty
Clarence Eugene “Hank” Snow was born on May 9, 1914, in Brooklyn, Nova Scotia. He survived a difficult childhood and, as a young teen, went to work as a cabin boy on a schooner. On payday, feeling flush, Snow spent a few dollars on his first guitar, a T.Eaton Special. This humble beginning led him to Halifax’s CHNS Radio in 1933, where he began his career, while also performing at county fairs and on local radio stations in the Maritimes and Western Canada.

In 1936, Snow recorded under RCA Victor’s Bluebird label in Montréal and signed what would become the longest continuous contract in the history of the country music recording industry – lasting 47 years.

Country music legend Ernest Tubb invited Snow to join the Grand Ole Opry in 1950, where he -continued to perform for four and a half decades. That same year, his landmark hit I’m Movin’ On topped the Billboard country chart and remained there for 21 consecutive weeks, a feat yet to be surpassed. Over the years, Snow recorded more than 100 albums, was elected to eight music and song-writing halls of fame, and was voted Canada’s top country performer 10 times.