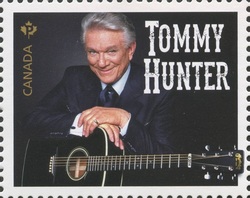 Tommy Hunter: Canada’s Country Gentleman
Tommy Hunter got his start at a young age: armed with a rented guitar, the legend from London, Ontario, began performing at his local church and a veteran’s hospital at nine years old. Inspired by country legend Roy Acuff, he worked to perfect the musicianship and on-stage persona that would make him so popular.

The 16-year-old Hunter marked his radio debut in 1952, and by the time he was 20, he was a featured singer on CBC-TV’s Country Hoedown. This experience paved the way for his own series, The Tommy Hunter Show, on which appeared the likes of Shania Twain, k.d. lang and Hank Snow. The broadcast lasted for 27 years, making it the longest-running network country music show in the world and making Hunter’s name synonymous with Canadian country music.