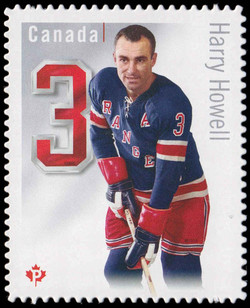 Harry Howell
By his retirement, Harry Howell had 1,581 professional hockey games to his credit, more than any other defenceman. The durable and dependable defender from Hamilton, Ontario, hit the ice with the New York Rangers at just 19 years of age and stayed with the team for 17 years.

Howell earned his name on the Norris Trophy and a spot on the First NHL All-Star Team during the 1966-67 season. To honour their hero, ecstatic fans, dignitaries and businessmen attended the Harry Howell Night celebration January 25, 1967, at Madison Square Garden. There, and in his hometown, Howell was showered with gifts, including engraved watches, a new car, trips to resorts, a gas barbecue, a box of cigars, a seven-foot artificial Christmas tree and a year’s supply of cheese.

After his years with the Rangers, Howell played for the Oakland Seals and the Los Angeles Kings®. He switched to the World Hockey Association in 1973, eventually retiring as a player in 1976. Howell continued to work in professional hockey in the front office and as a scout until 1979.