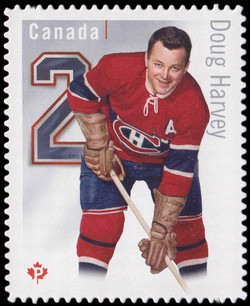 Doug Harvey
Doug Harvey, born in Montréal’s Notre-Dame-de-Grâce neighbourhood, joined the Montreal Canadiens full-time for the 1948-49 season. He quickly became known for controlling the pace of the game by carrying the puck until he was ready to make a play. The team won the Stanley Cup in 1953, an early sign of the record-setting five consecutive championships the Canadiens would earn between 1956 and 1960.

Harvey’s defensive skill earned him 10 appearances on the First All-Star Team and anchored the legendary Montreal lineup that included Maurice Richard, Jacques Plante, Jean Béliveau and Bernard “Boom Boom” Geoffrion. During this record-setting period for the Canadiens, Harvey was awarded the Norris Trophy in 1955, 1956, 1957, 1958 and 1960.

Following the 1960 win, team captain Maurice Richard retired and Harvey took over. He held the title for just one year – a season that earned him a sixth Norris Trophy – before being traded to the New York Rangers in 1961. There he won his final Norris Trophy. Before retiring in 1969, Harvey played for various teams including the Detroit Red Wings and the St. Louis Blues®.