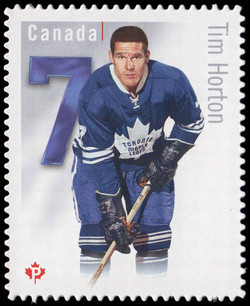 Tim Horton
Known for his incredible strength, the Cochrane, Ontario-born Tim Horton joined the Toronto Maple Leafs’ full-time roster and helped the Leafs to Stanley Cup championships in 1962, 1963, 1964 and again in 1967.

Off the ice, Horton was a businessman. In 1964, he opened his first Tim Hortons Donuts in Hamilton, Ontario. Its success tempted him to retire in 1969; so assuming he’d be turned down, he asked the Leafs to double his salary. To his surprise, the Leafs agreed and Horton signed on for one more year.

Horton then played for the New York Rangers, the Pittsburgh Penguins® and the Buffalo Sabres®. On February 20, 1974, the Sabres played in Toronto. As Horton returned to Buffalo, his still-brilliant career was ended by a fatal car accident.

Horton left an incredible legacy on the ice – 23 NHL seasons, four Stanley Cup championships and three appearances on the NHL First All-Star Team. Though he never won the Norris trophy, his achievements rival those who did. A generation of Maple Leaf fans remembers Horton as the greatest defenceman to don the blue and white.