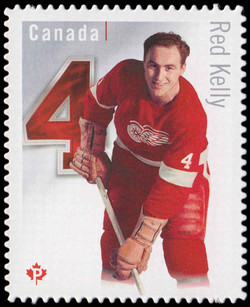 Red Kelly
Hailing from Simcoe, Ontario, Red Kelly was considered a gentleman – a reputation that would earn him the Lady Byng Trophy four times in the NHL. He could nonetheless take care of himself on the ice. Years of boxing at St. Michael’s College proved his toughness.

Kelly was invited to Detroit’s training camp and started with the Red Wings for the 1947-48 season where he played with superstars like Gordie Howe, Ted Lindsay and Sid Abel. A key member of the Red Wings, Kelly helped Detroit win the Stanley Cup in 1950, 1952, 1954 and 1955.

During his 20-year career, Kelly proved his versatility. He succeeded as a defenceman with the Red Wings, earning the inaugural Norris Trophy in 1954. Then, in 1959, he moved to the Toronto Maple Leafs to play as a centre for eight successful years. Kelly – along with teammates Frank Mahovlich, Johnny Bower, Dave Keon, Andy Bathgate, and Tim Horton – brought home four more Stanley Cup victories for the Leafs. After retiring as a player, Kelly returned to successfully coach NHL hockey.