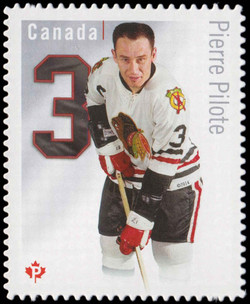 Pierre Pilote
Born in Kénogami, Quebec, and raised in Fort Erie, Ontario, Pierre Pilote learned to skate at a young age. As a teenager, Pilote had nowhere to play locally: his rink had burned down. Luckily, he was invited to play with the St. Catharines Teepees and then the Buffalo Bisons, a farm team for the then-named Chicago Black Hawks.

Pilote made it to the NHL for the 1955-56 season with the Black Hawks, where he was a reliable defenceman, playing through many injuries. He could be a tough guy – a reputation well-earned in a tussle when he defeated both Henri and Maurice Richard of the Montreal Canadiens. The versatile Pilote made a virtue of learning from other players, giving himself the nickname “Mr. Xerox.”

Paired with Elmer (Moose) Vasko, Pilote was key to the Black Hawks’ Stanley Cup Championship in 1961. He was named the team’s captain, leading such legends as Bobby Hull and Stan Mikita. For seven consecutive years from 1960 to 1967, Pilote earned spots on NHL All-Star teams. His success as a defenceman earned him the Norris Trophy three times, from 1963 to 1965.