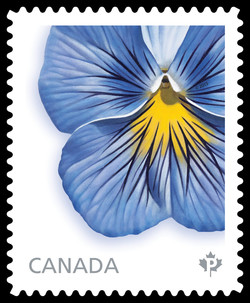 There are few flower beds in Canada that don’t have at least a handful of pansies showing their colourful, smiling faces. Who can resist smiling right back? Now, with these stamps, such floral favourites spread the same cheer by mail and to collectors around the world.

Canadian gardeners may be interested to learn that there’s a homegrown twist to the modern-day pansy. It was British naval officer and former Newfoundland governor Lord James Gambier and his gardener William Thompson who, after crossing various species of viola with Viola tricolor, eventually produced the familiar pansy in 1839.

The flower’s name comes from pensée, the French word for thought or remembrance. Pansies bloom in three visually distinctive classifications – blotched (or faced), single-coloured (clear) and single-coloured with dark lines radiating from the centre (whiskers). While the flowers are considered perennials, they tend to diminish after their first year, so most gardeners treat them as biennials.

Part of the reason pansies are so popular in Canada is that they prefer cool temperatures. They are one of the season’s earliest blossoms. When planted in the fall, some varieties known as Icicle pansies can overwinter successfully and bloom in the spring.

These stamps feature ‘Delta Premium Pure Light Blue’ and ‘Midnight Glow,’ both illustrated by first-time philatelic artist Laurie Koss. “True blue flowers are rare. The ‘Delta Premium’ is a solid blue with a yellow centre and it has whiskers. The second is a beautiful multi-coloured Icicle pansy with shades of purple, pink, orange and yellow. I wanted two pansies that were as different as possible to create a definite contrast. And that was achieved,” says Koss.

The Official First Day Cover was cancelled in Pansy, Manitoba.