"Friends and Family and Trips. In front of Simpsons" by Conrad Poirier 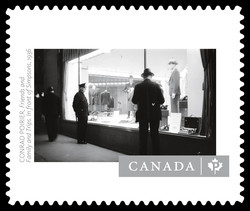