"Alex Colville on the Tantramar Marshes" by Geoffrey James 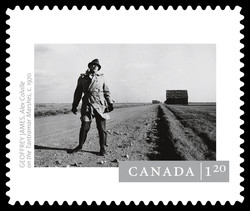