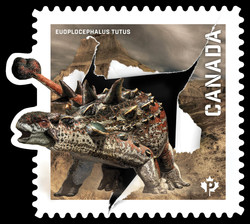 Unearthed from the Canadian bedrock, these prehistoric creatures once chomped and stomped their way through places we now call home. Brought back to life by Toronto stamp designer Andrew Perro and Vancouver-based paleoartist Julius Csotonyi, these fearsome beasts now roam from coast to coast through the mail.

Perro was thrilled to work on this issue, and he brought a sense of childhood wonder and adult fascination to the design.

“Whether being startled by them on the big screen, seeing their massive fossils in museums or reading books about them with my kids, dinosaurs have universal appeal,” says Perro. “Their existence on Earth continues to capture the imagination of young and old alike.”

Picture, if you will, the perilous land these formidable creatures once inhabited during the Late Cretaceous period. The well-armored Euoplocephalus tutus ate mostly low-growing vegetation and defended itself from predators with a clubbed tail. Foraging herds of horned Chasmosaurus belli also kept a look out for hungry meat-eaters, but there was usually safety in numbers.

The ostrich-like Ornithomimus edmontonicus – an opportunistic predator itself – used its speed to outrun pursuers or catch its own snack. Meanwhile, in the shallow coastal waters of the inland sea that once covered much of North America, the mosasaur Tylosaurus pembinensis stalked fish as the king of its own domain.

But nothing was more ferocious than Tyrannosaurus rex, the famous tyrant king of dinosaurs. The enormous carnivore, featured on the stamp and uncut press sheet, has very real ties to Canada. “Scotty,” one of the most complete T. rex skeletons ever found, was unearthed near Eastend, Saskatchewan.

Perro created a stark backdrop for these creatures from photographs of Dinosaur Provincial Park, one of Canada’s richest sources of dinosaur fossils.

“The backgrounds have the same look as traditional Canadian landscape stamps and feature the beauty of the Alberta badlands,” explains Perro. “So many dinosaurs have been found there that it’s like stepping back in time 66 million years.”