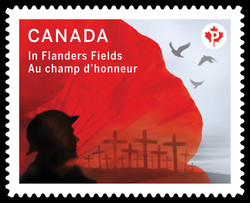 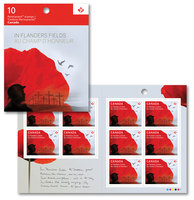 In Flanders fields the poppies blow1
Between the crosses, row on row,
That mark our place; and in the sky
The larks, still bravely singing, fly
Scarce heard amid the guns below.

On May 2, 1915 – in the second week of the Second Battle of Ypres – Guelph, Ontario native Major (later Lieutenant Colonel) John McCrae, a surgeon with the First Brigade of the Canadian Field Artillery, mourned the death of his friend, Lieutenant Alexis Helmer. An officer in McCrae’s unit, Helmer had been killed instantly by a direct hit from an eight-inch German shell.

Some critics believe that when McCrae became overcome by the horrors of war he chose to write about his sorrow. The poem he composed to commemorate Helmer and the thousands of other soldiers who lost their lives on the Ypres Salient has left an indelible imprint on the Canadian perspective of war.

In Flanders Fields is arguably the best-known poem of war and remembrance. Recited at annual Remembrance Day services, it is engraved (along with its French-language adaptation, Au champ d’honneur) on marble plaques in the Memorial Chamber of the Peace Tower and graces many other war memorials in Canada and other parts of the world.

According to q30 Design’s Glenda Rissman, designers Janice Carter and Tejashri Kapure began with the photograph of a real poppy – the fragility and translucency of the flower setting the respectful tone of the stamp. The images of the crosses “row on row,” the larks “still bravely singing” and the instantly recognizable silhouette of a helmeted soldier were all influenced directly by lines in the poem.

“The design hit the right marks emotionally, but in a way that’s restrained,” says Rissman. “There are not only literal elements, but also other aspects that add greater depth: for example, how the grey and white form a cross on the Official First Day Cover. Not everyone will see that, but those who do will appreciate it. There is a certain bleakness to the stamp and the booklet cover, but there’s beauty there too – which are the same elements McCrae was bringing together in the poem. On the mini-pane, we felt it necessary to use the whole poem, as that is what’s being honoured here.”

McCrae himself was an indirect casualty of war, dying January 28, 1918, of pneumonia and meningitis. The Government of Canada, through the Historic Sites and Monuments Board of Canada, designated John McCrae as a National Historic Person in 1946 and McCrae House as a National Historic Site in 1966. The building contains permanent and temporary exhibits about the life and times of McCrae, who was also honoured on a Canadian stamp in 1968.

In Flanders Fields is a quintessentially Canadian poem: one that has linked generations and perpetuated the memory of those who made the ultimate sacrifice. One hundred years later, the power of its verses to evoke the horror of war remains as strong as the day they were written.

1. While the 1915 version of the poem published in Punch reads “the poppies blow,” various handwritten drafts and copies by McCrae end the line with the word “grow.”  We have included both texts on the stamp booklet.