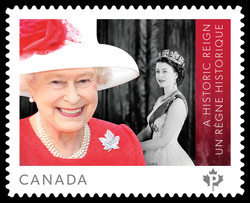 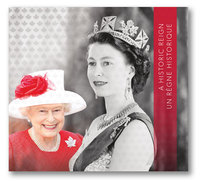 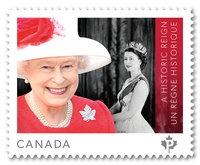 On September 9, 2015, at 12:30 p.m. eastern time, Her Majesty Queen Elizabeth II will have reigned over the United Kingdom, Canada and all other realms of the Commonwealth for 63 years, seven months, two days and 16 and a half hours, surpassing the reign of her great-great-grandmother, Queen Victoria. She will become the longest reigning sovereign in modern Canadian history.

Since acceding the throne on February 6, 1952, Queen Elizabeth is, for many Canadians, the only monarch to have reigned during their lifetime.

Designed by Entro’s Doreen Colonello and Gerald Querubin, the stamp offers early and recent photographs of The Queen. In an image taken during the Royal Tour to Canada in 2010, Her Majesty wears a striking red dress, reminiscent of Canada’s flag, and a silver maple leaf pin given to her mother, Queen Elizabeth (later the Queen Mother) by the people of Canada.

According to Querubin, “The design is a reflection of Her Majesty’s past and present. The past is depicted in a timeless portrait of Her Majesty’s coronation in 1953. The present photo reminds us of Her Majesty, as she makes history as the longest reigning Canadian sovereign. The red band symbolizes a ribbon, for celebration.”

The stamp joins the more than 60 others featuring Her Majesty that were issued by Canada Post and its predecessor, the Canadian Post Office Department.