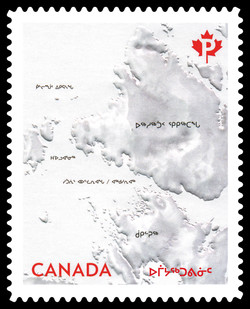 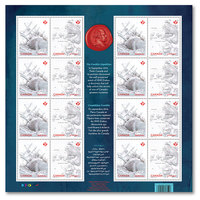 Piece together the famous history of an ill-fated Arctic voyage, and the Canadian discovery that located it more than a century and a half later. This stamp honours the Franklin Expedition and is a map of the Arctic region where the expedition met its grisly fate. Locations on the map are written in Inuktut, a tribute to the stories of Inuit eyewitnesses, passed down through oral accounts that helped pinpoint the eventual discovery.

“The mystery of Franklin’s expedition has long captured the imaginations of Canadians. It’s a story of leadership, brave exploration, our history, our culture and our iconic North, all wrapped together,” says the Honourable Peter MacKay, Minister of Justice. “These stamps reflect Canadians’ pride in technology, while embracing the traditional stories and knowledge that helped make the discovery of Erebus possible and highlight a cherished moment in the history of our nation.”

“Canadian stamps have a long history of celebrating our great explorers,” says Deepak Chopra, Canada Post President and CEO. “These stamps honour Franklin and his bold men but also celebrate the discovery of a shipwreck that had eluded previous and perilous searches: the long-lost Erebus.”

In 2014, Parks Canada and its partners located the remains of HMS Erebus, one of two ships from Sir John Franklin’s ill-fated 1840’s journey in search of the Northwest Passage. Franklin’s voyage ended in tragedy when his ships became permanently trapped in ice. The surviving sailors eventually died in a desperate southbound march.

This distinctive collectible will appeal to boating and marine enthusiasts, history buffs and Canadiana collectors.